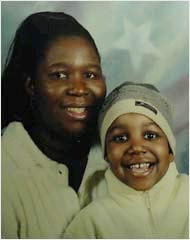 The family of Carol Simon is grieving after she was killed while walking on Eastern Parkway near Bedford around 5:30PM on Saturday. Simon, a 35-year-old nurse's assistant, had been on her way to take her son to swimming lessons when an argument between two men became violent and one pulled out a gun.

Simon and her son Kieron, 9, had driven to an Exxon to buy some things. Simon realized she forgot her purse, so she left her son in the car at the gas station and walked the short distance to her apartment to retrieve it. On the way back to the car, she was on that phone with a friend when she was shot. Her brother-in-law told the Times, “She said to the friend, ‘I got a bullet. I have to call 911.'"

Police do not believe Simon was the intended victim, as the shooter fired at another man. The police knew Simon because she "helped treat trauma victims" - including cops - at Brookdale University Hospital. Her brother revealed to the Daily News that NYPD Assistant Chief Joseph Fox told him and the rest of the family that Simon was "part of the team" and that "he would solve the case. He would not leave any stone unturned." Simon was also a third-year nursing student at the College of Staten Island.

Community leaders are offering a $3,000 reward for information about the crime. They also asked the community to come forward: State Senator Eric Adams said, "When a bullet leaves the barrel of a gun, it not only pierces the flesh of an individual, but it pierces the soul and the flesh of the body of our community," while civil liberties lawyer Norman Siegel said, "When you grow up in New York, the last thing you’re supposed to do is squeal. This is not squealing. This is what a good citizen is supposed to do.”

An undated photograph of Carol Simon and her son Kieron