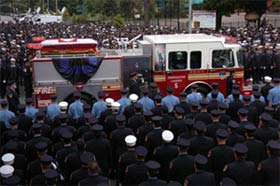 After being fired for speaking to a reporter, a lawyer who had represented a slain firefighter's family in their lawsuit against the city is now suing the widow and her children. Way to keep those bad stereotypes about lawyers going!

After the summer's deadly Deutsche Bank fire, where firefighters Robert Beddia, 56, and Joseph Graffagnino, 34, died, their families indicated they would sue for up to $180 million. Which would be a payday for any lawyers involved. Now the Daily News reports Linda Graffagnino, her two young children, and other lawyer John Meringolo are being sued by Marc Fernrich.

Fernrich feels that he's owed money, after putting in 100 hours into the case, "They share in the benefits of my service. [Meringolo] acts for them, and because of that they're liable." But Meringolo says he fired Fernrich for speaking to a reporter without permission and called Fernrich, whose client list includes Junior Gotti and Steven Madden, self-promoting. Meringolo wants the case thrown out, "What he's done is what gives lawyers a bad name."

As for Linda Graffagnino, who is caring for a 1-year-old son and 4-year-old daughter, she told the News, "I'm disgusted because I feel this man is trying to extort me. And he's trying to use me and my children to do it."

Photograph of Graffagnino's funeral from the FDNY; Graffagnino grew up in Dyker Heights and hung out with firefighters at Ladder 149, Engine 284 as a child - he was working with the same company when he died