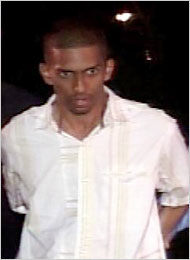 Omesh Hiraman, the 22-year-old St. John's University student who caused panic when he brought a .50 cailber rifle on campus, will be arraigned today in his hospital room at Bellevue. Queens DA Richard Brown said that Hiraman was being "held on two counts of fourth-degree criminal possession of a weapon (with intent to use said weapon unlawfully against another and possession of a rifle in a building or grounds used for educational purposes) and several violations of the New York City Administrative Code (possession of a rifle without a permit or a certificate of registration)." He will face up to one year in prison if convicted.

Hirman's lawyer said that his client is schizophrenic and that he was in a lot of pain from back surgery. Attorney Anthony Collelouri said Hiraman "was wearing a mask so that whatever was going to hurt him could not find him." Collelouri added that Hiramn had dreamed of joining the Navy, but his scoliosis made that impossible. Hiraman became depressed at Cornell and dropped out. Collelouri suspects that Hiraman could have been contemplating suicide with the rifle.

A different lawyer, Michael Paul, says that Hiraman had come into his Jackson Heights office, asking questions about how to purchase a gun, saying he was researching gun control. Hiraman purchased a $180 rifle legally in Poughkeepsie, using cash but without ID or a background check. He did not have a permit to possess it.

Former roommates from Cornell tell the Post that Hiraman was "irresponsible and got upset over very little things"; they had suggested counseling to him. Another classmate from Cornell and Stuyvesant High School told the Daily News, "I always thought that he was a bit weird and somewhat socially inept. ... He never really knew how to communicate well with people. I knew it was going to happen."

The NY Times describes Hiraman's family home as a "competitive environment in which academic success was demanded." His mother said, "When my son came to me and said to me, 'All my dreams have been shattered,' I told him, 'You can make new goals and strive toward them.' We had no clue" of what he was going to do."