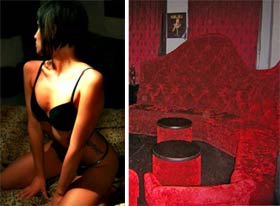 At the Hot Lap Dance Club on West 38th Street, police say customers could indulge not just in hot lap dances but some more intimate fun by the hour in cubicles, private bedrooms or even "off-premises." And what's more, the joint was run by a group of people, including one who started a voter reform advocacy group after the 2000 election and a private police force cop.

Undercover cops posing as men having a bachelor party were told, per the Daily News, "they could have a private room - with a bed - for $250 an hour, plus whatever they spent on the women." The club also had a "house dealer of cocaine" and, if you tipped, alcohol (otherwise it was BYOB). Also, there were live sex shows and sex toys abound--all for a $50 cover and $20 membership fee, on top of whatever else one would spend. The money was apparently laundered through lawyer Louis Posner's Voter March, and money found in Posner's and his wife's bank accounts and safe deposit boxes could allegedly be traced back to the club.

The Post spoke to one regular, who was upset the club was padlocked, "It was f- - -ing awesome! This was the greatest establishment." However, some employees were thrilled; one stripper said Posner was a "a sleazy, disgusting and disloyal boss." And some neighbors in the building claimed they knew it was a den of sin, while tenant said to the Times, '“I always see beautiful ladies coming in and well-dressed guys. But I didn’t know what it was. I heard it was for a photography studio.”

#arrest
#brothel
#crime
#hot lap dance club
#prostitution
#strip club
Do you know the scoop? Comment below or Send us a Tip
A new Gothamist is coming! We’ve moved comments over to our beta site. Click here to join the conversation and get a preview of our new website.