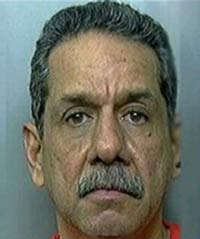 After the shooting, there was speculation that the husband could have been the culprit (one reason: it was strange that his SUV wasn't damaged) and he was even questioned by the police. After a year-long investigation, the Westchester DA's office announced they had finally enough forensic evidence to, per the NY Times, "connect Mr. Perez-Olivo to a handgun recovered from a nearby lake shortly after the killing." New Castle police chief Robert Breen said, "It was a puzzle, and all the pieces fit."

Perez-Olivo, who had lives near Bill and Hillary Clinton in Chappaqua, was disbarred in 2006 for mishandling four clients' cases (in fact, one juror was appalled with his defense of a man who was eventually found guilty of killing his wife's lover). It has been suggested that Perez-Oliva was targeted by unhappy clients. Additionally, Perez-Oliva has been unsuccessful in getting his wife's $500,000 life insurance policy because of his status as a suspect in the murder.

He is being held on $1 million bail, less than the prosecutors' requested $5 million but much more than his defense lawyer's suggestion of $50,000. Perez-Oliva gave an interview with WCBS 2, denying the charges and saying htat three men did shoot him, "I only regret, this whole situation, I didn't protect her. I tried, I failed. The idea that I would hurt her is, to anybody that really knows us, is inconceivable."

#Carlos Perez
#clinton
#hillary clinton
#manhattan
#murder
#ny times
#Peggy Perez
#suv
#The Police
#wcbs
#Westchester DA
Do you know the scoop? Comment below or Send us a Tip
A new Gothamist is coming! We’ve moved comments over to our beta site. Click here to join the conversation and get a preview of our new website.