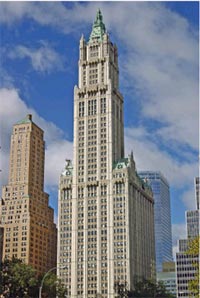 Yikes: The Manhattan DA's office charged a well-known lawyer with forcible touching, third-degree sex abuse and harassment after two female employees complained about his advances. The lawyer, 68-year-old Richard Dienst (father of WNBC reporter Jonathan Dienst), did not enter a plea during his arraignment yesterday.

The complaint is...very detailed. Apparently Dienst would accost female lawyers at firm, Queller, Fisher, Dienst, Serrins, Washor & Kool, which is located at the Woolworth Building. From the Daily News:

Dienst lifted up the woman's shirt and tried to "place his mouth on informant's breast, without permission or authority" and after she "asked the defendant to stop," the complaint said.

Unwilling to take no for an answer, Dienst "then placed his hand down the back of the informant's pants, placed informant's hand on his penis," according to the complaint.

He apparently also said, "Look at what you did to an old man. You made an old man's weekend." The DA's office investigated after the lawyer complained and found another employee suffered similar harassment. According to the Post, the complaint said Dienst "grabbed and stroked [her] breast and lower back without permission or authority" and then "pulled [her] hand and upper body toward his clothed penis and attempted to place [her] hand and upper body on and around his penis."

Dienst faces six misdemeanor charges and could be in jail for a year if convicted. The NY Times says he'll be back in court in August, "possibly to negotiate a plea deal." And Dienst was fired ; a source tells the Post "he was a real problem child" at the firm. Fun fact: One of his clients was the cop who lost his job after his wife spiked his meatballs with pot so he'd fail a drug test.