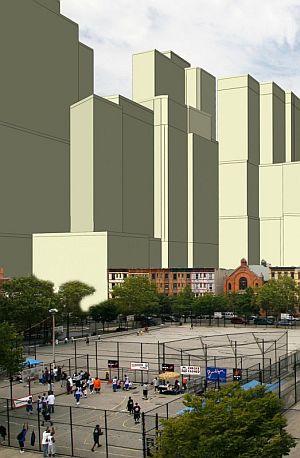 Recently obtained court documents suggest that developer Bruce Ratner is starting to sweat the future of the $4 billion Atlantic Yards project, which would bring the New Jersey Nets to downtown Brooklyn, along with 16 skyscrapers with residential and commercial space. Lawyers for Ratner’s firm were in court last Friday to try and accelerate the appeal process in a lawsuit brought by Develop Don’t Destroy Brooklyn, who argues that the project was rushed to approval by the state in 2006 without a thorough environmental review.

Ratner’s lawyers are warning the court that the lengthy appeal process is putting the project in jeopardy because “the credit markets are in turmoil at this time . . . There is a serious question as to whether, given the current state of the debt market, the underwriters will be able to proceed with the financing for the arena while the appeal is pending.” If the appeal is not quickly resolved, developers “are likely to encounter significant difficulties and cost increases in concluding the bond financing that is essential to the arena's completion,” lawyers argue.

The environmental review suit is one of two lawsuits currently stalling the project; Develop Don’t Destroy has a second suit in federal court challenging the state’s use of eminent domain to condemn privately owned properties to make way for the 22-acre development. A lawyer for the MTA, arguing for project, insisted in court on Friday that the legal battle was having “a chilling affect” and was simply a stalling tactic. A spokesman for Develop Don’t Destroy told the Brooklyn Paper, “Our lawsuit was not ‘designed’ for anything. It was filed in order to make sure that a state agency follows state laws.”

Computer rendering of the Atlantic Yards project via Pbase.