The numbers of lawsuits filed against the NYPD this year has reached a "historical high" of 8,882, according to a new report from the Comptroller's office. "The NYPD has seen the number of claims rise 55 percent over the last five years," the report states, noting that the $185.6 million the City paid to settle claims in 2011 is a 35% increase over the $137.3 million paid in 2010. "Although there are no easy ways to reverse the trend, clearly more must be done."

A former Law Department attorney told the New York World in October that his former employer had become arrogant in defending police officers from allegations of misconduct after a recent staffing surge. "They got really cocky, saying we're not going to settle, we're going to take them to trial."

The report also notes the drop in complaints against police made to the CCRB, which "indicates that individuals are simply bypassing the CCRB and directly filing claims and civil actions." Whether a revamped CCRB can prevent that runoff remains to be seen. Stop and frisks (which have decreased markedly in 2012), dubious marijuana arrests, and outright bogus trespassing cases all have helped fuel the increase in lawsuits against the NYPD.

In addition to creating a "task force" of members of the NYPD, Law Department, CCRB, and Comptroller's office to control areas that are deemed "high-risk in terms of claim activity," the report suggests that the NYPD begin tracking the individual officers named in claim suits and payouts. The idea is not new, and the CCRB already tracks complaints of police misconduct. "Our tracking system shows every officer who has had a complaint or complaints filed against them, and the nature of the complaints," CCRB spokesman Linda Sachs says. "The NYPD has access to the system."

Mayoral spokesman John McCarthy only offered boilerplate to the Daily News in response to the NYPD tort spike: “Police officers make more than 23 million contacts with the public each year and cope with incredibly difficult situations on a daily basis."

Here's a useful, if difficult to read map of which precincts the claims against the NYPD originated from in FY 2011. 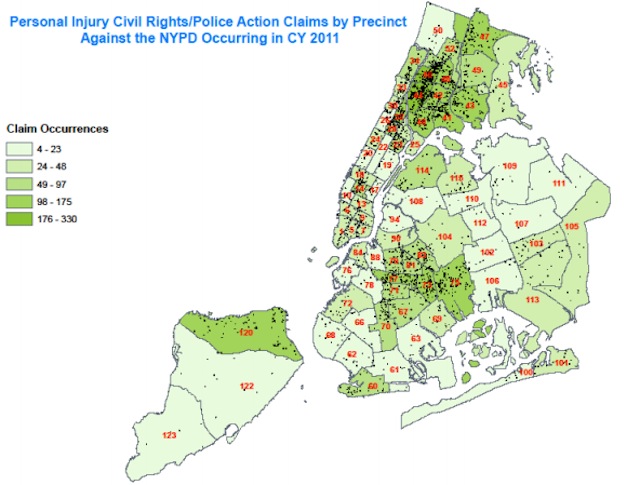 #CCRB
#corporation counsel
#law department
#nypd
#Ray Kelly
Do you know the scoop? Comment below or Send us a Tip