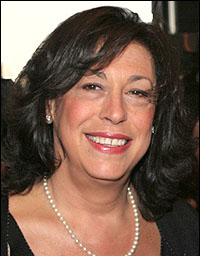 You might think flying business class is always about being fanned with palm leaves while flipping through books on golf, but sometimes there are real hardships going on behind that curtain, as Lynne Meadow, who makes $395,824 a year as artistic director of the non-profit Manhattan Theatre Club, discovered last August on a flight from Rome to New York on Continental Airlines. The Sun has it that Meadow (pictured) is now suing the airline after an argument between herself and a flight attendant culminated in her being interrogated by the FBI upon landing.

Meadow says her trials began when she was awoken by attendant Chris Boone's conversation with a co-worker. She promptly shushed him, setting off what she asserts was a flight-long vendetta by Boone. For instance, she was not able to watch a movie because her armrest monitor didn’t work: Coincidence or sabatoge? So the in-flight manager set her up with a new monitor, but when she later tried to put her old monitor back in place, it snapped off its base, which infuriated Boone. During the ensuing argument, he allegedly yelled:

You destroyed airline property! There is no way this could have come off by itself. From the moment you 'shushed' me during takeoff, I knew there would not be enough attendants on this plane to take care of you. The authorities will deal with you on the ground.

that reduced Meadow to tears, but Boone was pitiless, and she was greeted in New York by Port Authority police, who interrogated her before handing her over to the F.B.I. for further questioning; after an hour she was released. If Meadow wins the lawsuit she should definitely use the money to commission David Lindsay-Abaire to write a clever play about the many annoyances of first-class air travel; this story sounds like something MTC subscribers would simply adore.

#continental airlines
#lawsuit
#Lynne Meadow
#manhattan theatre club
#MTC
#suing
Do you know the scoop? Comment below or Send us a Tip