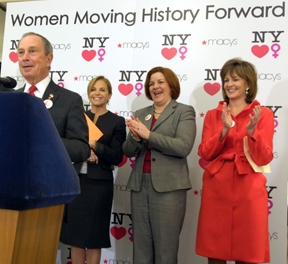 Mayor Michael Bloomberg's civilian life got a jolt: His company, Bloomberg L.P., was sued by the Equal Opportunity Employment Commission for "a pattern or practice of demoting and reducing the pay of female employees after they announced their pregnancies and after they took maternity leave."

Mayor Bloomberg had previously settled a lawsuit with a former Bloomberg L.P. employee, Sekiko Garrison. From a 2001 Village Voice story by Wayne Barrett:

Garrison alleged that Bloomberg told her twice to "kill it" when she informed him she was pregnant, adding "Great! Number 16," a reference to the number of women then on maternity leave.

Bloomberg denied saying it during the lawsuit, but in a voice-mail message he left her immediately afterwards, he said he'd heard he'd upset her, adding both that he'd "certainly never said anything" and that he "never meant anything." He also said—in a message that was not reported in prior news stories—that he didn't know until another executive told him that "we have six people pregnant."

And a 2001 Michael Wolff column in New York magazine questioned Bloomberg's workplace behavior with female employees after reading Garrison's court papers: "When Bloomberg sees Garrison speaking with Bill Beutel, the local news anchor, at a Corporate Challenge road race in Central Park, Bloomberg, in the presence of other employees, accuses her, allegedly, of wanting to have sex with the anchorman."

The EEOC says that "pregnant women and new mothers were excluded from management meetings and subjected to stereotyping about their abilities to do their jobs because of their family and caregiver responsibilities" and that complaints to the HR department were dismissed. Mayor Bloomberg told reporters he knew "nothing whatsoever" about the suit. "You'll have to talk to Bloomberg L.P. I haven't worked there, as you know, in an awful long time." Still, WNBC points out, he retains a 68% share in the company.

Back in 2001, when running against Bloomberg in the mayoral race, Mark Green used the "Kill it" allegation in an advertisement.