A Manhattan woman is suing the Spanish clothing chain Zara for allegedly selling her a dress with a rat sewn into its lining. As evidence, the woman has submitted photos of the alleged rodent-filled garment.

According to the lawsuit, Cailey Fiesel bought a black dress from a Zara in Greenwich, CT in July. When she finally wore it in August, she noticed a "disturbingly pungent odor." From the Daily News:

“Despite getting up from her desk and walking around, she was unable to escape the odor,” she says in a new Manhattan Supreme Court lawsuit against the fashion company.

“As the day went on, Ms. Fiesel started to notice what felt like a loose string from her dress rubbing against her leg,” and “without giving it much thought she reached down with her hand to try and locate the piece of string that was rubbing against her.”

“Ms. Fiesel jumped out of her chair in shock, people surrounded her desk to see what the commotion was while Ms. Fiesel was paralyzed with fear, she then ran to remove the dress," the suit says." After removing the dress she found that a dead rodent was sewn into the hem of the dress." 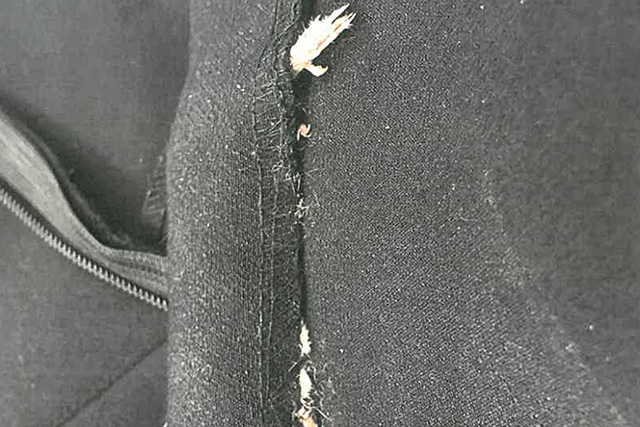 The photo on the label says the dress was made in Turkey, but it's unclear where the rat may have been trapped into the outfit. When explaining how long it takes a rat to decompose, the Orkin website says, "The length of time for the rodent to decompose depends on many factors, including size of the rodent, temperature, humidity and accessibility to decomposers like flies. Unfortunately it may take three weeks or more to completely decompose." Of course, this is in relation to rodents trapped in walls, not clothing.

Fiesel, who lives in Manhattan, claims that she suffered from a rash due to "rodent-born disease" as well as emotional trauma.

A Zara spokesperson told TMZ, "Zara USA is aware of the suit, and we are investigating the matter further. Zara USA has stringent health and safety standards, and we are committed to ensuring that all of our products meet these rigorous requirements."

Have you checked your clothing for dead rats today? Let us know what you find in the comments.

#lawsuit
#rat
#rat in dress
#zara
Do you know the scoop? Comment below or Send us a Tip
A new Gothamist is coming! We’ve moved comments over to our beta site. Click here to join the conversation and get a preview of our new website.