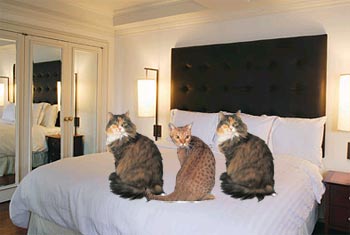 A novelist and her husband are suing a Manhattan hotel for negligence after their cats almost died at the hotel. Marisha Pessl and Nicola Caiano claim that the cleaning staff at the AKA Sutton Place hotel, which says it's "pet-friendly," left out some rat poison--which was eaten by their three cats.

The Post reports Pessl, who wrote Special Topics in Calamity Physics, and Caiano decided to relocate to the AKA SP after their Tribeca apartment was damaged by a fire. Their lawyer Constantine Dimopoulous said the couple is looking for $25,000 in damages after they returned to their room finding their two Maine coons and one ocicat on the floor "practically dead."

Their lawyer, Constantine Dimopoulous, said, "The vets treated [the cats] and, thankfully, did everything they could to save their lives. [But] they've been treated on multiple, multiple occasions since and have been pretty much irreparably harmed." He added that the hotel refused to pay for the cats' medical bills--plus "You don't leave rat poison lying around rooms in a pet-friendly hotel."

#AKA Sutton Place
#cats
#lawsuit
#pet-friendly
#rat poison
Do you know the scoop? Comment below or Send us a Tip