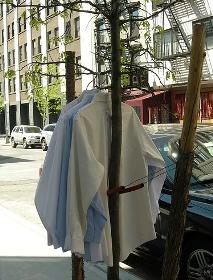 While there are many trials in NYC that quickly become media circuses, we're breathless about an insane lawsuit that has gone to trial in Washington DC because it involves a service very familiar to New Yorkers. An administrative law judge Roy Pearson is suing his dry cleaners for millions of dollars after they lost his pants (he says; they say they have his pants, but he just doesn't want to claim them). Pearson originally tried to sue for $67 million, claiming that Custom Cleaners violated consumer protection laws, and somehow his $54 million lawsuit made it to trial.

Yesterday, the Post noted how Pearson cried on the stand, "as he recalled a missing pair of trousers from his blue and maroon suit." This is how the NY Times, which headlines its article "Judge Tries Suing Pants Off Dry Cleaners," explains the dispute:

Judge Pearson says in court papers that he owned exactly five suits, all Hickey Freemans, one for each day of the workweek. But the waistlines had grown “uncomfortably tight.” So he took the suits to Custom Dry Cleaners, in a strip mall in gritty northeast Washington, for alterations.

When the owners, Korean immigrants who came to America in 1992, could not find one pair of pants, Judge Pearson demanded $1,150 for a replacement suit. The owners did not respond; he sued.

Using a complicated formula, Judge Pearson argues that under the city’s consumer protection law, the owners, Soo and Jin Chung and their son, Ki Chung, each owe $18,000 for each day over a nearly four-year period in which signs at their store promised “Same Day Service” and “Satisfaction Guaranteed.”

After being sued, the Chungs offered to settle, for up to $12,000, but Pearson appeared to believe he could become a crusader for customer rights and the lawsuit headed to trial. The Chungs' lawyer, Christopher Manning, suggests that Pearson's divorce and financial woes - not to mention weight gain - played a role in the lawsuit, saying, "The plaintiff has decided to use his intimate knowledge of the District of Columbia laws and legal systems to exploit non-English-speaking immigrants who work in excess of 70 hours per week to live the American dream."

Pearson, who is representing himself, said in his opening statement, "Never before in recorded history have a group of defendants engaged in such misleading and unfair business practices." This is why Washington media is liveblogging the trial; the Washington Post's Marc Fisher wrote about Soo Chung's testimony:

Indeed, back in 2002, when there was a problem with one of Pearson's pants, Custom cut him a check for $150, the replacement value of the garment. The Chungs took Pearson at his word that that was what he would have to pay for new pants; he never produced a receipt for the replacement purchase, nor did the Chungs even ask him for one.

But the Chungs subsequently asked Pearson to take his business elsewhere; the encounter with the customer was difficult enough that the family decided to ask him to find another dry cleaners where he might be happier with the service. But Pearson protested, asking the family to let him return to the fold of customers at Custom, in part because it was so convenient to his house, but also because he had been a satisfied customer. The family relented, a decision they surely rue today.

Pearson, though, did not cross-examine Chung, who cried during her testimony describing the toll the lawsuit has taken on her.

The trial wrapped up its closing arguments yesterday and the judge will give a verdict next week. The judge presiding, Judge Judith Bartnoff, said of consumer protection laws, "This is a very important statute to protect consumers. It's also very important that statutes like this are not misused." Naturally, trial lawyers are worried that the case will damage their reputations. And the Chungs' lawyers have a description of the Chungs' side of the story on a website. There's also a fund to help the Chungs with their defense costs.

Here are some tips about finding a dry cleaner. And have you had any good or bad experiences with your dry cleaner?

Photograph of natural dry cleaning by Rukii on Flickr