The suit, first reported by the Real Deal, accuses Trump and Epstein of luring the anonymous plaintiff and other young women to four parties at Epstein's so-called Wexner Mansion at 9 East 71st Street. Epstein allegedly lured the plaintiff, identified in the suit only as Jane Doe, with promises of a modeling career and cash.

Another anonymous woman, identified in additional testimony as Tiffany Doe, corroborates Jane's allegations, testifying that she met Epstein at Port Authority, where he hired her to recruit other young girls for his parties.

Trump had known Epstein for seven years in 1994 when he attended the parties at Wexner, according to the suit. He also allegedly knew that the plaintiff was 13 years old. 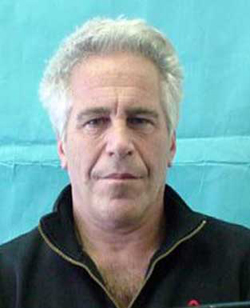 Jane Doe filed a similar suit in California in April, under the name Katie Johnson, also accusing Trump and Epstein of rape. That suit was dismissed on the grounds of improper paperwork—the address affiliated with her name was found to be abandoned. Today's suit confirms that the plaintiffs are one and the same.

Monday's complaint details extremely violent and horrific alleged encounters between Trump and Doe. In what Doe's attorneys describe as a "savage sexual attack," Trump allegedly tied her to a bed and exposed himself before raping her. When she pleaded that he stop, Trump allegedly "responded... by violently striking Plaintiff in the face with his open hand and screaming that he would do whatever he wanted," according to the suit.

Afterwards, Trump allegedly threatened the plaintiff, saying that her family would be "physically harmed if not killed" if she were to speak about the abuses. Epstein allegedly proceeded to rape Doe twice more, attempted to strike her, and screamed that he, rather than Trump, should have taken her virginity. Epstein also allegedly reiterated threats to Doe's family.

Doe remained silent for many years, according to court papers, because she had no reason to believe that the threats against her and her family had been lifted. The constant media spotlight on Trump, taxing her emotionally and mentally since last summer, apparently pushed her to come forward. Monday's civil complaint makes the case that New York's statute of limitations—five years for civil rape cases—should be waived, because the plaintiff was denied her "freedom of will" to speak.

Doe demands $75,000 in damages, according to the complaint, as well as attorneys fees and an order of protection against Trump and "such other and further relief as the Court may deem just and proper."

Trump's campaign did not immediately respond to a request for comment on Doe's allegations, but the candidate denied the claims in the California suit this Spring. “The allegations are not only categorically false, but disgusting at the highest level and clearly framed to solicit media attention or, perhaps, are simply politically motivated,” he told Radar.

Epstein served 13 months in prison in the early aughts for soliciting a minor for prostitution.

#alleged rape
#donald trump
#Jane Doe
#Jefferey Epstein
#Katie Johnson
Do you know the scoop? Comment below or Send us a Tip