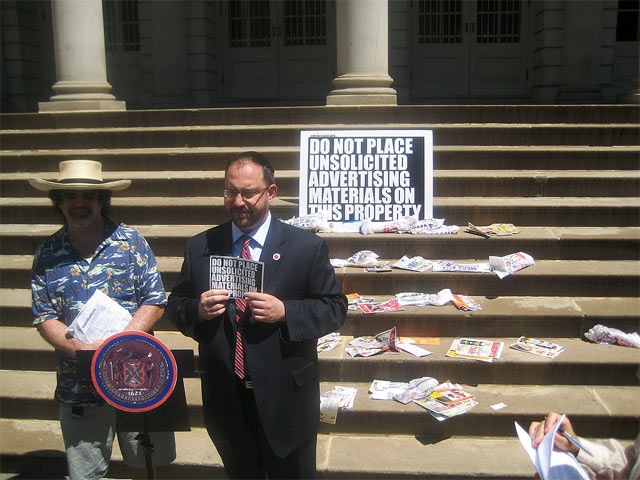 As of this past Saturday, property owners are now able to place signs letting businesses know their unwanted ads are no longer wanted. A state law, passed in January but only in effect now, allows homeowners and landlords to complain about advertisers leaving unsolicited fliers, menus, circulars, etc., and the Department of Sanitation is now able to issue fines of $250 per infraction.

City Councilman Simcha Felder said at a City Hall press conference yesterday (complete with staged flier mess!), "Far too many homeowners in the city have had to endure the onslaught of fliers and circulars that have been dumped on our doorsteps"-- that includes Felder's mother, who was fined $100 by the DOS for fliers on her stoop! -- "Finally, New Yorkers can say ‘Stop the Junk’ and have the force of the law behind them, with the ability to file complaints directly against distributors. The result will be cleaner streets, more livable neighborhoods, and less waste.”

You can post a sign saying you don't want ads delivered to your home (here's a PDF of a sample sign--it must be at least 5" x 7" with the letters 1" in size) and here's the complaint letter. Be warned that the signs might not immediately do the trick, as Sustainable Flatbush's Mark Levy told amNY he has a sign but still received a circular. Levy filled out a complaint form.

#department of sanitation
#garbgage
#lawn litter law
#Simcha Felder
#unwanted fliers
#unwanted menus
Do you know the scoop? Comment below or Send us a Tip
A new Gothamist is coming! We’ve moved comments over to our beta site. Click here to join the conversation and get a preview of our new website.