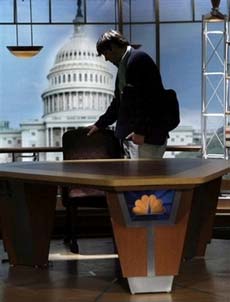 The weekend was filled with tributes to the late NBC News journalist, Tim Russert. New York State lawmakers, including Senators Schumer and Clinton, announced yesterday that they are going to introduce a resolution to rename part of U.S. Route 20 after Russert. The section they want to rename runs in front of the Buffalo Bills' stadium--Russert grew up in Buffalo and was an unabashed fan of the Bills, as well as the Sabres.

His favorite musician and friend, Bruce Springsteen, dedicated "Thunder Road" to Russert during a concert in England, saying, "He was always a strong voice for honesty and accountability in American government .. but beyond that he was a lovely presence, a good father, husband, and good guy. He was a regular at many E Street Band shows and I'm going to miss looking down and seeing that big smiling face in the crowd."

And yesterday's Meet the Press broadcast was a gathering of Russert's friends, fellow journalists and political pundits. Led by Tom Brokaw and including Gwen Ifill, Maria Shriver and political strategists James Carville and Mary Matalin (they broke down during the taping), they remembered Russert's drive, tenacity, and generous spirit. You can see video here, and the photo at right is of Russert's son Luke touching his chair on the Meet the Press set.

This morning, Luke Russert went on the Today show to discuss his father's passion for work and family. Russert had celebrated Luke's graduation from Boston College with a trip to Italy; he had just returned from the trip and was at NBC's Washington bureau, working on Sunday's show, when he collapsed last Friday. Video of Luke Russert after the jump:

The Times reports a public wake is scheduled for tomorrow, at 2 p.m. at St. Albans in Washington D.C. and a private memorial, televised on MSNBC, will be on Wednesday at the Kennedy Center.

#journalism
#Luke Russert
#nbc
#nbc news
#Tim Russert
#tv
Do you know the scoop? Comment below or Send us a Tip