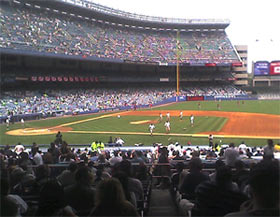 Note to baseball stadium visitors: Not only do you have to beware of foul balls, you may need to watch out for drunks and others who may fall from the upper levels and injure you. Last week, a baseball fan from Seattle on an East Coast baseball pilgrimage (Yankee Stadium, the Hall of Fame in Cooperstown, and Fenway Park) was injured at last weekend's Angels game, when a fan fell on top of him. According to doctors, the man fell so hard that Paul Robinson's vertebra was broken.

Robinson has been at Montefiore Medical Center over the past week recovering from the incident; luckily, he's not paralyzed and only had a screw put into his neck. Robinson's family said that the Yankees wouldn't give them information about what happened for insurance purposes, but when the Daily News got involved and contacted spokesman Howard Rubenstein, the Yankees promised to take care of the family's travel arrangements. Now the Yankees are reportedly looking at security tapes to find out who the falling man was.

And speaking of the Yankees, we thought Ben Widdicombe's gossip item about Derek Jeter at an All-Star party was particularly funny. Sizing up all the attention Barry Bonds was getting from the ladies, DJ "wryly" noted, "If this party was in New York, all the girls would be on my s---." Dude, at least you have your very own Anti-A-Rod shirt, courtesy Neighborhoodies.