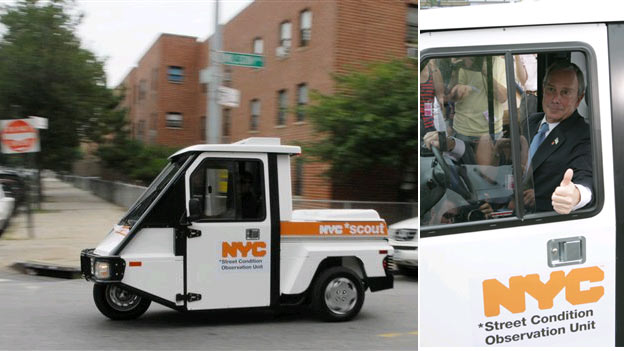 The other day, Mayor Bloomberg unveiled a new way the city will be able to monitor streets and make sure they are in good repair: The Street Conditions Observation Unit (SCOUT). SCOUT inspectors will "drive every City street once per month and report conditions that negatively impact quality of life to 311." The inspectors will use their Blackberrys to report things like graffiti, clogged sewers, potholes, damaged bus shelters, and more.

Mayor Bloomberg explained, "It's government's responsibility to find the problems and fix them, not to sit there and say 'Duh we didn't know.' That's not what good government is all about, that's not what customer service is all about." Of course, Gothamist is all for this (and wish we could join a SCOUT citizens' unit) but it also seems like stuff the city should be doing anyway. The Mayor also demonstrated driving the SCOUT vehicles and promised "You would expect to see after a period, by the spring maybe . . . a material reduction in the number of rough streets and potholes."

Bloomberg is very enthusiastic about the program; he told reporters, "It'd be nice if when you see a SCOUT guy ... you honk your horn and say, 'Way to go, baby, you're making my city [better]!' Now, then we'll get a noise complaint... but that's another issue." And while the inspectors are expected to add almost 50% more calls to 311, the inspectors will not write tickets or report on noise pollutions or homeless, according to the Post.

The city also announced that its street cleanliness Scorecard found NYC streets to be a record-breaking 94.3% "acceptably clean" during the 2007 fiscal year. The press release mentioned that "even the lowest performing area in the city - Section 2, located in Brooklyn Community Board 3, which encompasses densely populated transportation hubs in Bedford-Stuyvesant, Stuyvesant Heights, and Ocean Hill - had 82.1% of streets rated 'acceptably clean,' the highest rating it has ever received. " In May, the city announced that the cleanest streets in the city were in residential neighborhoods, like Staten Island's Great Kills, Queens' Douglaston and Little Neck, and the Bronx's Riverdale.