Latest Trump Groping Victim: He Grabbed My Breast & Said 'Don't You Know Who I Am?'

The latest woman to accuse Republican presidential candidate Donald Trump of sexual assault is a yoga instructor who came forward to share an alleged incident from 1998. In a Manhattan press conference with lawyer Gloria Allred, Karena Virginia said, "I have lost sleep over this. I have been fearful about bringing unwanted attention to me and my loving family, which includes my husband, daughter and son, but in the end, I feel that it is my duty as a woman, a mother, a human being and an American citizen to speak out and tell the truth about what happened to me."

Virginia, who is from the tri-state area, was 27 years old and waiting for a car to take her home after the U.S. Open in Flushing, Queens in 1998 when she encountered Trump. "As I was waiting, Donald Trump approached me. I knew who he was but I had never met him," she said. "He was with a few other men. I was surprised when I overheard him talking to the other men about me. He said, 'Hey, look at this one, we haven't seen her before, look at those legs': as though I was an object rather than a person. He then walked up to me and reached out his right arm and grabbed my right arm. Then his hand touch the right side of my breast."

"I was in shock," Virginia recalled. "I flinched. He said, 'Don't you know who I am?' I felt intimidated and powerless." She said she responded "Yes," and then left in her car.

"My shock turned to shame," Virginia told reporters today. "I felt ashamed that I was wearing a short dress and heels. That feeling of shame stayed with me for a while. And it made me disinclined to wear short dresses or high heels. For a number of years afterwards, I struggled with what to wear so as not to attract unwanted attention. I can remember one evening discussing this with my husband when he asked me why I did not enjoy dress shopping and why I would often wear a shawl at a dinner party or wear a longer dress. I had made my husband aware of what Mr. Trump had done to me. It was difficult for him to understand why I would ever blame myself for being violated."

Then, five years ago, Virginia said she saw Trump "in a business setting with many other people around. He looked me up and down a few times in a lecherous manner. This time, mixed with the feelings of shame, I felt disgust towards him because I had come to the realization that I was the victim and he had violated me when he groped me years earlier. I now understand that I was not to blame."

"She has shown tremendous courage in coming forward," Allred said of Virginia. Allred held a press conference last week with another Trump accuser, Summer Zervos, a former Apprentice contestant who accused Trump of groping and kissing her during what she thought would be a business meeting. Virginia, Allred said, was "noteworthy in that her allegations demonstrate how Mr. Trump selects his victims at random." 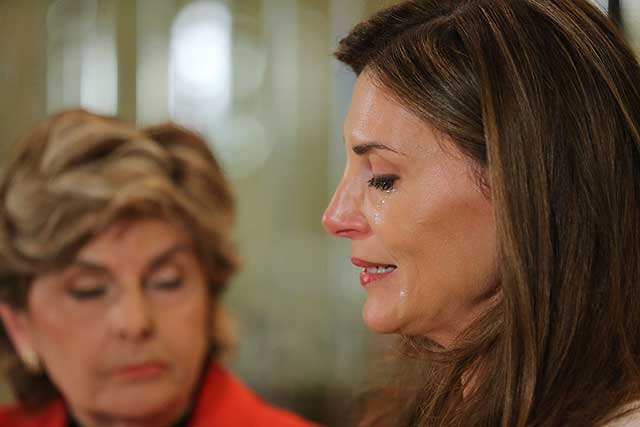 Allred, who was an elected delegate for Hillary Clinton at the Democratic convention, said she has had no contact with the Clinton campaign. The attorney said she is aghast at Trump's apparent use of his fame and celebrity to assault women: "The fact that you're a celebrity does not give you a license to violate women. To the contrary it gives you more responsibility to respect women as many women will look up to you as a role model because of your celebrity status. To show respect to women means that you need to respect their boundaries and not to act on your impulses to grab and grope at your pleasure."

Virginia was motivated to contact Allred after the Access Hollywood tape, which featured Trump bragging to host Billy Bush how he happily kisses and grabs women by the genitals without asking for consent, was leaked two weeks ago. Virginia also said that Trump's subsequent claims that this was just "talk" also prompted her to come forward.

"No one has asked me to come forward," Virginia told reporters. "In fact, many people advised me not to speak publicly about what Donald Trump did to me out of concern that I would also be attacked by him. I have been advised that Mr. Trump will probably call me a liar just as he has called all the other women liars who have made accusations against him, or perhaps he will just label me as another 'nasty woman.'"

She later reflected on her work as a yoga instructor, "I truly believe in the divine and in God... We are in a time of crisis. We are all need to find this inner peace within ourselves. This is how I'm finding my inner peace."