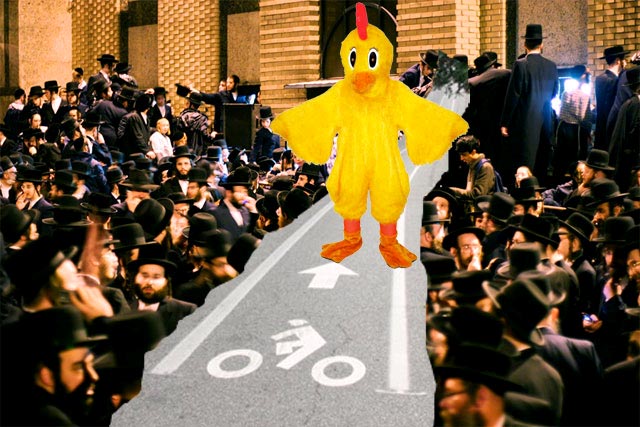 The Hasidic community has been upset over bike lanes in their South Williamsburg for months, what with the immodest apparel of female bicyclists and the lanes taking up street space. Previously, the Hasidim announced they would use private buses to intentionally block bike lanes; now a reader tells us about her ride today:

Things have gotten pretty terrible in the saga of the Kent Ave. bike lane, at least for me. Today I had to ride between North Williamsburg and Fort Greene. On my way there, an older Hasidic man stepped right off the empty sidewalk and into the bike lane right in front of me as I was riding by Shaffaer's Landing. He seriously tried to play a game of chicken with me and stepped in that lane when I was a good 10 yards back so I would have to swerve around him.

On my way back around 4 p.m. things got a bit worse. As I was making a left from Wallabout onto Kent to go under the BQE (not the best route, I know, but I wanted to get home quickly) a bus drive by a Hasidic man (no other people on it) sped up to make the right onto Kent in front of me even though there was no room for him to make the turn. I know this is hard to explain in an email, but he made it impossible for me to access the far right side of the street. I had to turn in between two lanes of traffic. There was no space for me to get over until I got closer to the light, which had by that time changed. I tried to pull up into the gas station on that corner, but a huge truck with a crane started backing out. I had to swerve back into traffic where I hit a huge crack and bit it. My head almost got run over by a car. Fortunately, I got away with a scraped knee and the creeps.

Of course, by the time I finally made it back to the start of the bike lane again on the other side of the BQE there was a guy driving his minivan down it...IN REVERSE! Can't wait to bring this up at the Community Board meeting.

That would be Community Board 1. The next meeting with a scheduled public hearing is January 1, 2009 (we're checking to confirm whether that's still on).