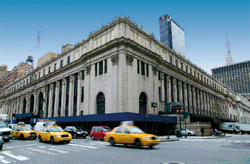 The state released the draft scope for the Moynihan Station project today, and while the details have yet to be finalized, The New York Sun outlines the document's major components. Madison Square Garden will be moved into the rear of the Farley Post Office Building, which will be renamed Moynihan Station. A remade Penn Station will be renamed Moynihan East and will feature a sky-lit train hall surrounded by a million square feet of retail space.

Two new towers will flank the 57-story 1 Penn Plaza Building just north of the current Madison Square Garden. The one to the west will consist of two million square feet of floorspace and the one to the east will be one million square feet. Several blocks around Madison Square Garden will be rezoned from manufacturing to residential and commercial designations, allowing office or residential towers to be built around the new transit hub. Also 4.3 million square feet of development rights from the site of the existing MSG will be transferred to properties in the surrounding area.

Coinciding with the development of the Hudson Yards farther to the west, it sounds like the west side of Manhattan should be dramatically different a decade from now if all goes according to plan. Moynihan Station has been a plan 15 years in the making, however, and not that much progress has been made. Perhaps the release of this latest report will be a turning point for the project. The Municipal Arts Society is following the developments closely.