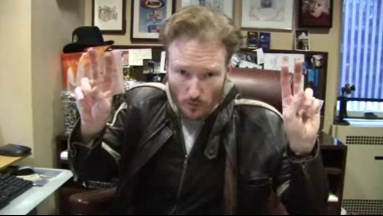 Conan O'Brien, who has been growing a "strike beard" and paying his non-writer employees out of pocket, will return on January 2nd -- and his West Coast network-mate, Jay Leno, will do the same. Yesterday the WGA released the following statement regarding this move.

“The AMPTP walked away from the bargaining table on December 7, rather than negotiate a fair agreement for writers. NBC forcing Jay Leno and Conan O’Brien back on the air without writers is not going to provide the quality entertainment that the public deserves. The only solution to the strike is a negotiated settlement of the issues. If the AMPTP won’t come to the table, then it’s time for responsible companies to come forward and negotiate a fair deal.”

reports that "In statements on Monday, Mr. Leno and Mr. O’Brien said they had supported the writers’ strike but decided that the time had come to return because of the risk that their nonwriting staff members would lose their jobs." As the late night hosts forge ahead, the Hollywood Foreign Press is prepared to do the same. With their Golden Globe awards coming up in mid-January, they requested that writers help prepare material. The WGA quickly made it clear that wasn't going to happen, and made this statement yesterday.

"The Writers Guild has notified the Hollywood Foreign Press Association and dick clark productions that their requests for an agreement to allow writers to prepare material for the 65th Annual Golden Globe Awards show have been denied. The Guild has also denied a request from the Academy of Motion Picture Arts and Sciences for a waiver in connection with the use of clips from motion pictures and past Academy Awards shows for use during the annual Academy Awards presentation."

Sounds like awards season will be more boring than usual this year, and possibly empty!