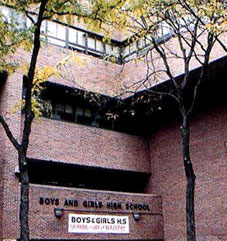 Some tardy students at Boys and Girls High School in Brooklyn tell the Post they aren't being allowed inside the school when they arrive late. And since they can't get into the school, many decide to skip out the whole day.

Additionally, some students who have been late numerous times are facing other punishment: Some are suspended, prompting some to just ditch the day--"I'm not gonna go there and get suspended. I guess I'm not going to school now."--and one student says her ID was taken away "before she was sent away for coming late for the sixth time since September."

School officials denied that all latecomers are denied entry, but Principal Spencer Holder, who believes some late students are just using that excuse to avoid school, did admit that students who were repeatedly 30 minutes or more late could be suspended if that happened more than 15 times. He said, "We do believe it's important we instill a sense of organization and structure in high-school kids."

Boys and Girls High School was given a C during the first city school report card. About 38% of students are absent, and the Post noticed one dean yelling to students at the late-entrance door, "Hats off, do-rags off, pants up!"

#attendance
#boys and girls high school
#high school
#late student
#public school
#tardy students
Do you know the scoop? Comment below or Send us a Tip