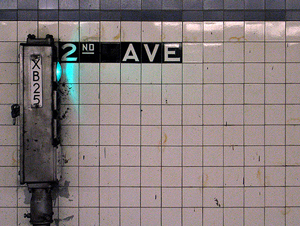 The 2nd Ave. subway isn't scheduled to receive any passengers until 2014, but some residents are relishing the prospect of a new line, while others suspect it could deliver trouble. People living on East End Ave. or York Ave. are cursed with a hike to the nearest subway station, but also somewhat insulated from the increased crowding and pricing pressures that easy access via a subway accompanies. The construction of the 2nd Ave. subway could change the whole neighborhood. The New York Times reports that real estate developers are already touting proximity to a subway line as a selling point for new buildings along 1st Avenue.

An agent with the Corcoran Group uses the new subway line as a major selling point in convincing buyers to shell out more than a million dollars for a residence that's a 15 minute walk from the 4/5/6 line. That's making current residents nervous, as they see local businesses being replaced by chain stores and anticipate the inevitable, and current, rise in rents that go along with a booming neighborhood.

The subway is not the reason that high rents and high-rises have encroached; that has been going on since the 1980s. But some residents suspect the train line’s arrival could be the final step in the transformation of Yorkville and the rest of the eastern Upper East Side from a relatively modest enclave of mom-and-pop stores and restaurants to just another grid of luxury towers and national retailers.

Census data analyzed by demographers at Queens College show that rents in Yorkville have risen nearly 42% between 1980 and 2000, versus 31% for the rest of Manhattan. Pedestrians currently have to navigate multiple bypasses around massive construction projects on and near 86th St. The owner of an area restaurant, Mustang, fears that the loss of sidewalk seating could cost the eatery dearly while the subway's under construction. His bartender looks forward to the end of crushing crowds that currently occupy the 4, 5, and 6 trains.

A 2nd Ave. subway line has been in the works for nearly a century, but plans for a replacement for elevated lines have been unable to get off the ground, or below ground, since 2nd Ave. service was ended in 1942. Drilling began again in April and subway service is planned to resume in seven years.