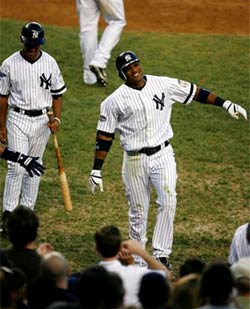 On a day when Jorge Posada went back on the DL and the news was almost as bad about Hideki Matsui, it was a good sign that the Yankees banged out 16 hits in a 12-4 victory Monday night. Posada will probably be unable to catch for the rest of the season at best and is more likely gone for the year. Matsui is rejecting the advice of doctors and trying one last time to rehab a knee that needs surgery.

Over the long term the Yankees will need to find some additional bats to replace Posada and Matsui, but their absence will not be as acutely felt in the short term if some players live up to expectations. To that note, Robinson Cano continued his rebound from an atrocious first half with a home run and another hit to raise his average to .260. Jose Molina added three hits and A-Rod hit his 21st to backup Sidney Ponson who improved to 6-1. New York also improved to nine-games over .500.