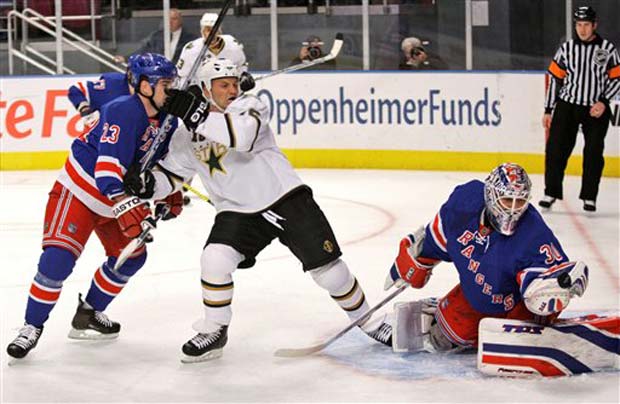 Did Sean Avery win a Stanley Cup with the Rangers when we weren’t looking? Sorry for asking, but with all the ovations for Avery Sunday and Monday it seemed like we had forgotten something. Avery certainly meant a lot to the Rangers in his 18 months with the team, but he was hardly the second coming of Mark Messier.

Monday night Avery was his usual antagonistic self, trying to mix it up with Brandon Dubinsky in the warm-ups and then trying to get after Henrik Lundqvist and Scott Gomez in the first period. In the end, Avery wasn’t much of a factor, as he didn’t even draw a penalty in his 17 shifts Monday.

But, the Stars ended up on top, winning 2-1 thanks to a goal from Mike Modano midway into the third period. The Rangers now get a well-deserved rest after playing seven games in eleven nights.