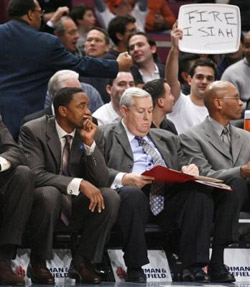 You know what makes the Pacers special? They actually had the brains to admit their mistake and fire Isiah. The Knicks haven’t figured that out and Monday’s 119-92 humiliation probably won’t change things.

And it isn’t so much that they lost to the Pacers, it’s the way they did. They played a good first quarter, went cold in the second rallied to tie the game at 64 and then stopped competing. Zach Randolph had 26 points, but also stopped to argue a call while the game was going on. Eddy Curry somehow ended up with only two rebounds. Indiana shot 58% from the field for the game.

At least Thomas finally sounded like he had enough and questioned the effort of his team after the game:

“As a coach, you bring certain things to the table, but our collective energy, our collective heart, our collective toughness, we say the right things but we don't gut it out for 48 minutes. We don't grind and we don't compete like we should for 48 minutes and I've never ... a lot of things that can be said about me and teams that I've coached and the way I played, but I've never been accused of not having heart or competing. Tonight was very discouraging to me because we didn't collectively play with heart and compete like I know I do."

The question is what is he going to do about it?