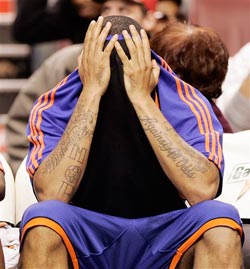 76ers 116, Knicks 87: The Knicks aren't the only team in the Atlantic Division that can put up the points. Philadelphia held New York to an ugly 33% from the field and Mike D'Antoni wasn't able to find a single player on his bench to give the team a spark, despite trying except Eddy Curry. The 76ers also out rebounded the Knicks 61-43 and forced the Knicks into taking 28 three pointers, which they only made 7 of. Elton Brand led Philly, picking up a double-double on 24 points and 14 rebounds.

#knicks
#mike d'antoni
#sports
#stephon marbury
Do you know the scoop? Comment below or Send us a Tip