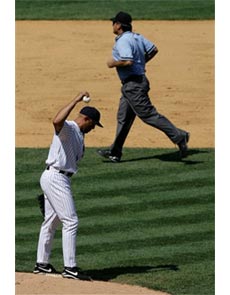 Jose Guillen has always hit well against the Yankees, but he took it to a new level in the four-game series the Royals just completed with the Yankees, where he went 9-for-16 with 4 home runs and several outfield assists. Guillen’s last home run of the series was off of Mariano Rivera in the 9th and it turned a 2-2 game into a 3-2 one that the Royals won.

Guillen’s blast ruined a great day from Mike Mussina. Mussina pitched eight innings and made only one mistake, that Miguel Olivo crushed for a two-run homer.

A-Rod brought the Yankees back to even with his own two-run blast in the seventh and that is where things remained until Guillen led off the ninth with a homer on an 0-2 pitch. The Yankees loaded the bases in the ninth, but Melky Cabrera grounded out to first to end the game.

#a-rod
#baseball
#mariano rivera
#Mike Mussina
#sports
#Yankees
Do you know the scoop? Comment below or Send us a Tip