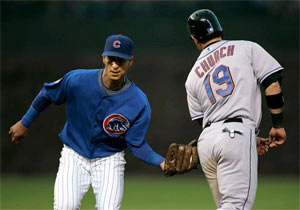 Cubs 7, Mets 1: After losing to the Phillies on Sunday and getting in to Chicago at 3:30 a.m. local time Monday, the Mets had to get ready for a game at 6:05. They looked like they could have used more rest. John Maine labored but got through six innings of two-run ball. But he got little if any help from his defense and bats.

The Mets' only run scored a run on a double-play grounded into by Jose Reyes in the sixth inning. It was Reyes' error in the eighth inning that opened the floodgates for the five-run Cubs frame that sucked the suspense out of a windy Wrigley Field. Aaron Heilman and Jorge Sosa helped cause the damage.

These teams go back at it Tuesday afternoon in a traditional matinée. Nelson Figueroa, the pride of Brooklyn, will try to put forth his third straight impressive start when he faces ex-Yankee and current struggler Ted Lilly. Even with a trip to Washington following the game, the Mets probably would have liked to play a night game. The schedule isn't so kind, however.

#Aaron Heilman
#baseball
#john maine
#Jorge Sosa
#jose reyes
#mets
#sports
Do you know the scoop? Comment below or Send us a Tip
A new Gothamist is coming! We’ve moved comments over to our beta site. Click here to join the conversation and get a preview of our new website.