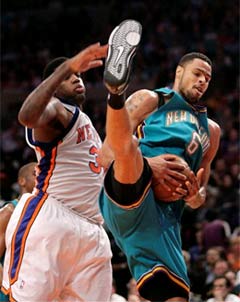 The Knicks clinched a losing record for the season with their 100-88 defeat Monday, but what happened off the court was much more interesting. Stephon Marbury, the pariah point guard who was reportedly banned from MSG, was supposed to show up tonight. At the morning shootaround Isiah told reporters, “We expect him here tonight,” when discussing Marbury. And, true to form, Marbury made his coach look bad again by not showing up at all.

While the press kept looking for Stephon, they missed an entertaining game. Isiah showed some brains and took advantage of the injury to Zach Randolph to see if some of the guys usually bolted to the bench can play. And, his faith was rewarded as Wilson Chandler and Randolph Morris showed some promise in their biggest auditions to date.

At 20-42 and 8-1/2 games out of a playoff spot it’s worth giving all the kids an extended look the rest of the way. Hopefully, Isiah won’t be around next year to make a decision on their futures, but perhaps a competent coach will be.

#basketball
#eddy curry
#isiah thomas
#knicks
#msg
#Randolph Morris
#Seth Wenig
#sports
#stephon marbury
#the knicks
#tyson chandler
#wilson chandler
#Zach Randolph
Do you know the scoop? Comment below or Send us a Tip
A new Gothamist is coming! We’ve moved comments over to our beta site. Click here to join the conversation and get a preview of our new website.