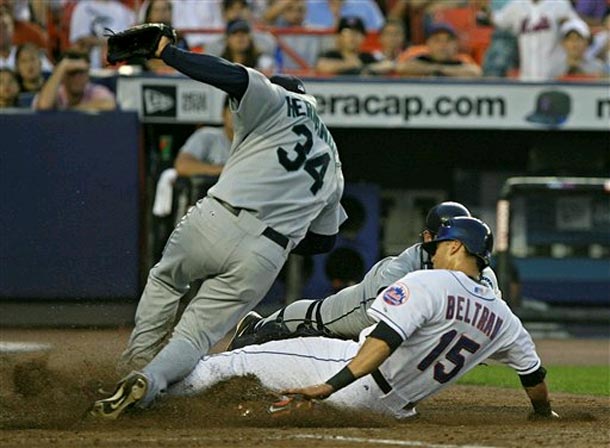 It seemed like such an innocent play at the time. Willie Blumquist grounded to third for what should have been an easy out, but David Wright bobbled the ball and the bases were loaded. But, the pitcher was due up and pitchers can’t hit, especially American League ones, right? Wrong, Felix Hernandez became the first AL pitcher in 37 years to hit a grand slam as he connected off of Johan Santana and sent the Mariners out to a 4-0 lead.

But, things did not end well for the young pitcher. With Carlos Beltran on third, Hernandez unleashed a wild pitch and suffered an ankle injury trying to cover home. Beltran scored to make it 5-1 and the Mets appeared to have a huge opportunity with Hernandez out of the game.

New York built a rally in the ninth with Jose Reyes leading off with a single and Carlos Beltran singling home a run. But, Carlos Delgado struck out as the tying run and Damion Easley was called out on strikes to end the game and start the homestand off with a 5-2 loss.