Last month, the day after 400,000 people peacefully marched through Midtown Manhattan to demonstrate against global warming, an action dubbed Flood Wall Street promised arrests and a rare opportunity to protest in front of the New York Stock Exchange.

Though Flood Wall Street organizers did not seek permission to demonstrate, unlike the People's Climate March, the NYPD told the protesters through back channels that police would allow the group to assemble in front of the NYSE, according to sources privy to the planning process. But when thousands of people streamed out of Battery Park the morning of September 22 to “carry out a massive sit-in to disrupt business as usual” and “target those profiting from the fossil fuel industry,” they found themselves herded not into the heart of the Financial District, but on several blocks of lower Broadway.

They remained there, blocking traffic but tolerated by the NYPD, for more than eight hours. By evening, organizers had declared victory, pronounced the action over and decamped to a nearby bar. Many participants who’d been sold on the action as an escalation of tactics from the enormous but somniferously staid People’s Climate March the day before, continued to sit on Broadway anyway, and police ultimately arrested about 100 of them.

While the decision not to make for Wall Street certainly confused the NYPD for a moment, it also gave up an arguably greater symbolic target, the stock exchange itself. This was a far cry from storming the lobbies of the financial giants who bankroll carbon extraction.

So was Flood Wall Street a tactical victory and an important radical pole pulling the larger climate movement to the left? Or a missed opportunity, hobbled by a reluctance to confront power and an organizing model overly reliant on the resources of big institutional backers? 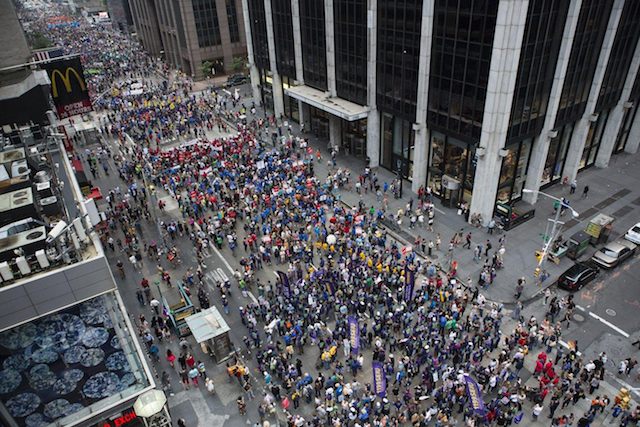 In a Nation article published the week after the protests, Michael Premo, one of the Flood Wall Street organizers and Jonathan Smucker, another Occupy veteran who helped out on Flood Wall Street, argued that the weekend was a success, and pushed back on the sniping from critics like Chris Hedges and Arun Gupta, who in the run-up to the People’s Climate March had dismissed it as a toothless photo-op when what was needed was a sustained campaign of mass civil disobedience, something more like the confrontational strategy originally promised by Flood Wall Street.

“The dichotomy between the PCM and FWS is a false one,” Smucker and Premo wrote. “What the world saw last week in New York was a vibrant movement ecosystem in which a broad mobilization and its radical edges engaged in a critical interplay.”

That first sentence, at least, is indisputably true. The relationship between the family-friendly march and the direct action billed as its radical alternative is far less antagonistic than it seemed at first blush, when the massive promotional campaign for the People’s Climate March made no mention whatsoever of the action the following day. 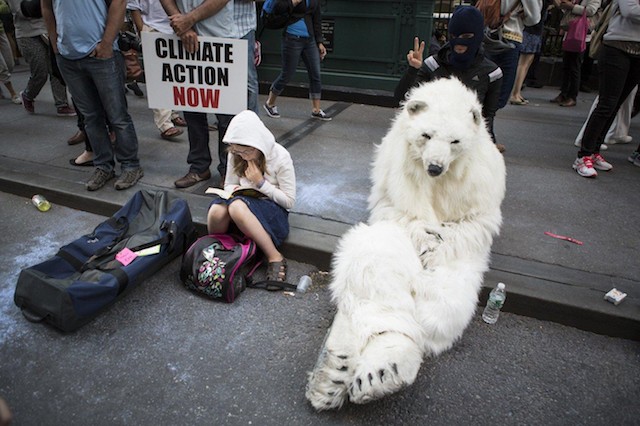 Preparations for Flood Wall Street took place in Bushwick spaces shared by the People’s Climate March and paid for by Avaaz, the online activist site that, along with 350.org, was one of the march’s main backing institutions. And though details of the accounting remain opaque, many of the people involved in planning Flood Wall Street were being paid directly by organizations affiliated with the larger march. “Everyone was employed by other folks,” says Winnie Wong, a veteran of Occupy and an organizer of Flood Wall Street. “There was an enormous amount of unofficial coordination,” adds Smucker, who helped in the action’s final planning stages.

To the extent that Flood Wall Street and the People’s Climate March represented coordinated parts of a two-tiered campaign, they resemble other recent trends in movement building, like the fast-food workers’ Fight for Fifteen campaign, which has adopted many of the tactics and appearances of small, radical alt-labor groups, even as it is quietly funded (and some say, steered) by the colossal Service Employees International Union.

If the People’s Climate March and its radical counterpart were more closely related than was immediately clear, is that such a terrible thing?

Smucker, one of the authors of the Nation article, thinks not. For him, both sides bring something the other lacks. “These big membership organizations have the resources and the social base that the radical grassroots lack,” he says. “But that social base can be a constraint—the leadership can’t step too far from where they see their base as being. Smaller, more radical groups don’t have that problem, but they’re constrained by lack of resources.”

In Smucker’s model, radicals are most effective when they’re working collaboratively with mass movements to pull them to the left, rather than staking out positions of ideological purity and political impotence outside the movement.

But not everyone’s convinced that Flood Wall Street achieved that goal. 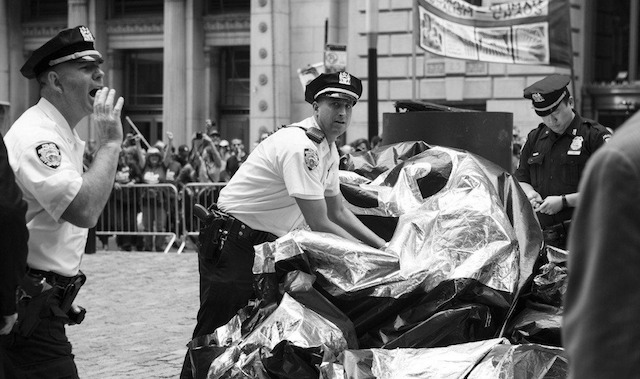 “What was the radical thing? What was the thing that challenged power?” asks Amin Husain, an activist who worked with Occupy Wall Street but was not involved with Flood Wall Street. “Did it pressure people to have a conversation that they weren’t having? I would say no. It was a performance of radicality.”

Viral-ready scenes of police busting heads have been critical to energizing movements, from Occupy to Ferguson, because they highlight the entrenched power they’re confronting, Husain says. But faced with a new, #deBlasiosNewYork police strategy that sought to deny activists that sort of imagery, Flood Wall Street failed to probe and escalate, to find the point where the new progressive mayor shows himself to be Bloomberg in disguise.

“The police give you the street, you’re surrounding the bull statue,” Husain says of the Flood Wall Street demonstrators. “Why wouldn’t you at least paint-bomb the motherfucker?” (To be fair, someone did try to lasso it.)

Flood Wall Street organizers categorically deny that there was any pressure from institutional supporters to tone down their approach, and Smucker says concerns about accepting institutional funding can easily be overblown.

“I’m very practical about resources,” Smucker says. “Movements don’t have enough of them and should get them where they can and make sure that there are no strings attached to them.”

For Husain, the tactical failures he saw had everything to do with the paid-activism model that undergirded Flood Wall Street. “The nature of getting money to do organizing is you don’t care about the outcome,” he says. “It creates the same detachments within the activists that we’re fighting outside the movement.” 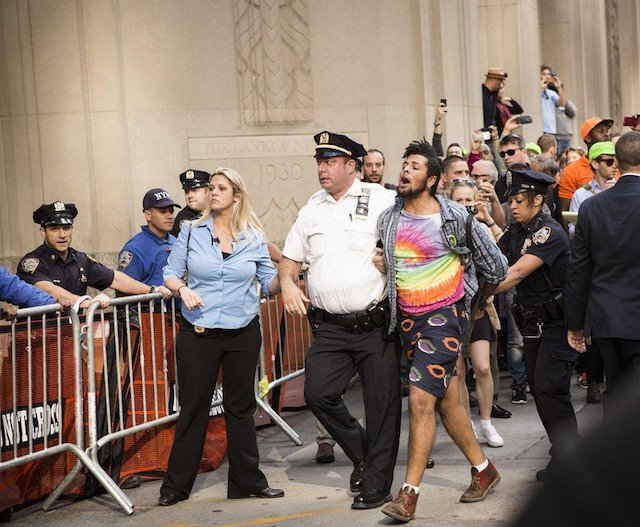 Lisa Fithian, a seasoned veteran of direct-action organizing and a living legend in direct-action circles, says she was also concerned by Flood Wall Street’s non-confrontational approach. "In my forty years of experience and study, social movements make a difference when they’re willing to engage in escalating activity that creates crisis—an authentic uprising of grassroots energy that challenges the status quo,” she said. “Those are not the elements I saw at the Climate March and Flood Wall Street... It did not create any real crisis for key decision makers.”

Fithian sees in the shortcomings of the weekend of climate actions a larger disturbing trend in activism. As "clicktivist" groups like MoveOn and Avaaz have amassed enormous political currency in the form of email lists, they have sucked oxygen away from the sort of traditional organizing efforts that build lasting movements capable of provoking a policy-shifting crisis.

“People building on-the-ground relationships that support them taking direct action is a key ingredient of creating those crises,” Fithian says. “My concern about the direction of our movements is that as we become more connected to online activism, we are less invested in building movements on the ground.” 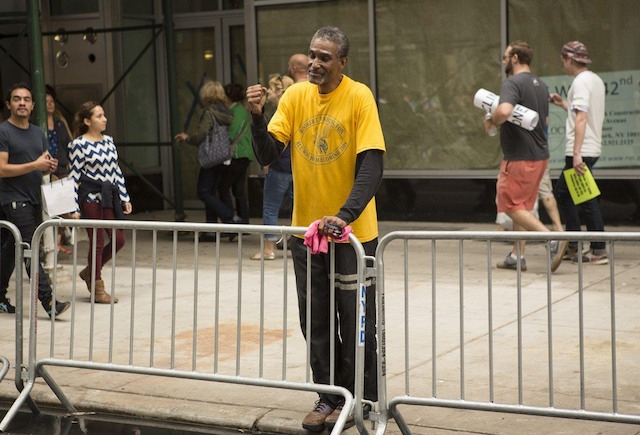 Skeptics of the weekend’s events all stressed that their critiques were grounded in a desire to push the movement forward, not tear it down, and defenders of the protests all agreed that there’s a crucial role for constructive critiques.

It’s clearly too soon to say whether the strategy of email blasts, subway ad campaigns, and inclusive, safe marches coupled with carefully curated exercises of civil disobedience will prove to be a watershed first step in movement building, or just another missed opportunity. Did the weekend build momentum for a self-sustaining grassroots movement? What comes next?

Recent emails to the People’s Climate March’s email list urged recipients to sign up with partner organizations and local organizing hubs, and to share their memories of the march online. Flood Wall Street organizers say they’re still working. “We’re committed to creating a movement that is sustained,” says Wong. “It's certainly not the end. It’s really just the beginning. I’m not entirely clear what that's going to look like, but we’re going to figure that out.”