Early yesterday morning, the NYPD executed the largest gang roundup in the city's history, arresting 103 members of the Make it Happen Boys, Money Avenue, and 3 Staccs gangs in Harlem.

The majority of the arrests concerned the Make it Happen Boys in the Manhattanville Houses, and their allies, Money Avenue, whose affiliation came from living between Morningside and Manhattan Avenues from West 115th to West 120th. Forty members of the MHB and 27 members of Money Avenue were arrested. Two members of MHB were arrested in connection to the fatal stairwell shooting of high school basketball star Tayshana “Chicken” Murphy in 2011.

3 Staccs are concentrated in the General Grant Houses, and 36 of their members were arrested yesterday. According to the Manhattan DA's office, these warring gangs were responsible for 10 murders, 46 non-fatal shootings, and 27 incidents of shots being fired.

The map below begins at West 111th Street and ends at West 134th. 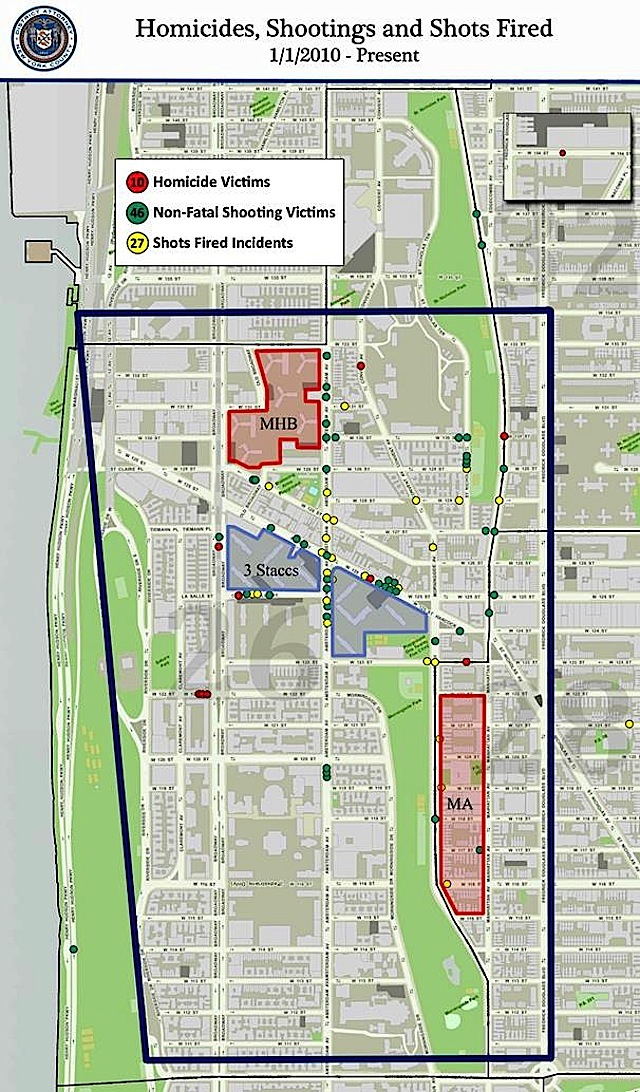 "To build a case this extensive, prosecutors and investigators analyzed more than 40,000 calls from correctional facilities, screened hundreds of hours of surveillance video, and reviewed more than a million social media pages," Manhattan DA Cy Vance said in a release.

The release notes that the gang members arrested yesterday were keen to comment on a similar gang crackdown that occurred in Harlem last year, yet they continued to correspond with their members in and out of Rikers, all the while, the DOC, the NYPD, and the DA's office monitored their communications.

NYPD Commissioner Bill Bratton told the Times that the roundup was a result of a new era of "extreme collaboration" between the NYPD and the Manhattan DA.

The commissioner said he envisioned a “seamless web” of information flowing between prosecutors and the police. Prosecutors will have access, for instance, to the network of security cameras on city streets the department uses to solve crimes, as well as the mountains of data collected on police reports, while detectives will receive the granular intelligence about criminal conspiracies gathered by prosecutors as they prepare for trial.

Five senior district attorneys were devoted to intelligence gathering, and they work closely with local precinct commanders and the Police Department’s field intelligence officers. The unit also employs paid interns and prosecutors to monitor calls of suspects from Rikers Island and to scour social media for evidence of conspiracies.

As murders have declined in Manhattan, both parties want to zero in on larcenies and assaults, which have risen. “We are taking each other’s best thoughts, and critically evaluating them,” Vance said. “No idea is off the table.”

#Bill Bratton
#cy vance
#gangs
#harlem
#The DA has paid interns listening to calls from Rikers
Do you know the scoop? Comment below or Send us a Tip
A new Gothamist is coming! We’ve moved comments over to our beta site. Click here to join the conversation and get a preview of our new website.