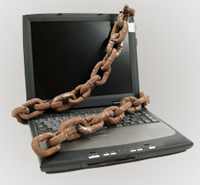 The laptop of a private consultant for the Financial Information Services Agency was stolen from a restaurant last night. The stolen computer could contain the personal financial information of as many as 280,000 retired city employees and the obvious concern is that the information could fall into the hands of identity thieves. The Daily News reports that the data could possibly include the names, address, social security numbers, and pension information of thousands of retirees.

Police sources indicate the computer was stolen around 8:20 pm Saturday night from the Korean restaurant Kang Suh at 1250 Broadway between 31st and 32nd Sts. and police interviewed the consultant Monday. The information on the computer may have been encrypted, but that is still under investigation.

1010WINS reports that City Comptroller William Thompson, who oversees the pension funds of city employees, was "outraged," and wanted to know how the members of the pension system would be protected from identity theft. In the meantime, a mayoral spokesman said that all city retirees whose data may have been on the laptop will be notified.