Because no one can get enough of controversy, even manufactured controversy, over a commercial featuring a plus-size model in a bra and underwear, here's more about the Lane Bryant lingerie ad kerfuffle: 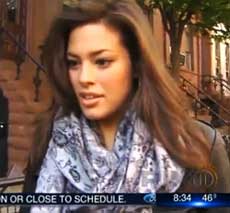 Model Ashley Graham, who is size 16 and 38D, spoke to WPIX about how ABC and Fox declined to air the ad, "The Victoria's Secret girls can flaunt around their panties all day long. But when there's a bigger woman with a little bit extra, they snipped it out immediately."

Lane Bryant's "Inside Curve" blog says, "ABC refused to show the commercial during 'Dancing with the Stars' without restricting our airtime to the final moments of the show. Fox demanded excessive re-edits and rebuffed it three times before relenting to air it during the final 10 minutes of “American Idol,” but only after we threatened to pull the ad buy... We knew the ads were sexy, but they are not salacious... If Victoria’s Secret and Playtex can run ads at any time during the 9pm to 10pm hour, why is Lane Bryant restricted only to the final 10 minutes?" The ad is after the jump.