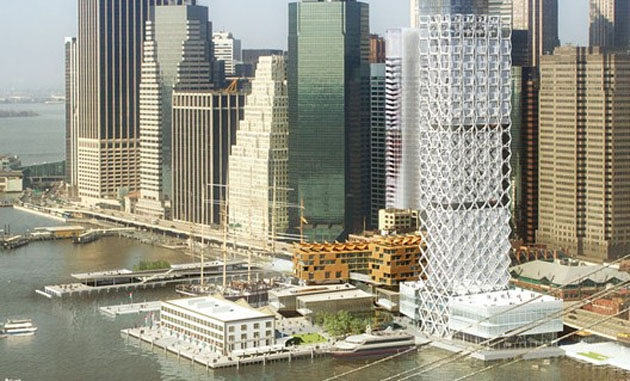 Never mind that mall owner General Growth Properties—the current leaseholder of the South Street Seaport, as well other retail outlets nationwide—has been scrambling recently to refinance massive debt by selling off $2 billion in rapidly devaluing stock. The company is still pushing forward with an ambitious plan (rendered above) to turn the underwhelming Seaport tourist trap into a more vibrant destination, by razing the existing Pier 17 mall, relocating the landmark Tin Building, and throwing up a 42-story waterfront condo/hotel tower, as well as a wood-based boutique hotel and two-story retail structures designed by SHoP Architects. 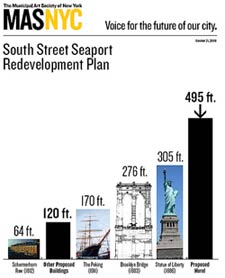 But first there's the little matter of the Landmarks Preservation Commission, the Community Board, local residents and the formidable Municipal Art Society, which is urging the Commission to reject the proposal because "the proposed tower overwhelms the historic buildings of the district, further severs the Seaport from its history and disrupts the views from and of the Brooklyn Bridge." (MAS provided this graphic, left, showing relative heights of the proposed hotel and other structures in the area)

Curbed sat in on the Commission meeting last night, and reports "the three-hour discussion had plenty of fireworks." During the public testimony, representatives from the Municipal Arts Society strongly objected to relocating the Tin Building because that "would set a troublesome precedent for the preservation movement."

Others called for the preservation of the Pier 17 building—which houses the shopping mall—because it was designed by Ben Thompson, co-founder of The Architects Collaborative. "The quote of the night, however, went to a woman who curtly stated in reference to the mixed-use tower, 'The pseudo-fishnet brings kitsch to a new level.'" Supporters of the project included documentary filmmaker Ric Burns; a woman read his testimony hailing the proposal's "impressive level of imagination and integrity." The Commission will hear more on the plan at a date T.B.D. For now, at least, Pizzeria Uno is safe.