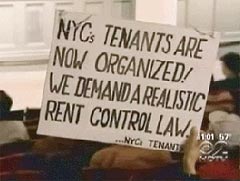 Last night, the Rent Guidelines Board recommended to increase rents for rent-stabilized apartments by 3.5-7% for one-year leases and 5.5-9.5% for two-year leases. This figure was deemed too high by tenants and not high enough by landlords.

This proposed increase is higher than last year's (3% for 1-year, 5.75% for 2-year leases), reflecting the rising costs landlords face.

The Post noted the meeting last night followed "a well-worn script" with tenants asking for a rent freeze and landlords asking for increases up to 14%. But the Solomonic approach pleased no one. 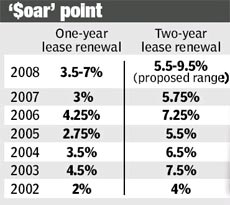 One landlord told WCBS 2 the proposed hikes won't help, "We're not going to be able to do painting. We're not able to do our façade. We're gonna have to forego putting on a new roof. We'll have to do patch work instead of replacing items."

But a 70-year-old woman who has lived in the Stuyvesant Town for 30 years said to the Daily News, "Nine percent is totally out of the question. It just makes me sick. I'm paying $1,200. Today I had no hot water."

There will be other public meetings before the final vote on June 19.

#inflation
#real estate
#rent
#rent guidelines board
#rent-stabilized
Do you know the scoop? Comment below or Send us a Tip