In a meeting marked by loud chanting and behind-the-scenes intrigue, the city Rent Guidelines Board voted last night to authorize the lowest increases in the 45-year history of rent stabilization, but denied tenants the rent freeze they'd adamantly sought.

The board voted 5-4 to allow increases of up to 1% for a one-year lease renewal and 2.75% for two years. They will affect tenants in the city's 985,000 rent-stabilized apartments whose new leases go into effect between Oct. 1 and Sept. 30, 2015. More than 100 angry tenants surged toward the stage after the vote, chanting, "No rent freeze, no peace!"

Landlord lobbyist Jack Freund, of the Rent Stabilization Association, said he was "disappointed" the increase was only 1%. The board's owner representatives had planned to ask for 5.5% and 9.5%.

From 2009 through 2013, the RGB allowed increases aggregating more than 15% for one-year leases and 20% for two-year leases, despite the recession and record levels of homelessness.

Owners have been "substantially overcompensated" over the last 24 years, said former RGB executive director Timothy Collins, now a tenant lawyer. The board has raised rents by 178 percent since 1990, he said, far more than the 144 percent that would have been enough to cover all of landlords' increased operating expenses and inflation. And this does not include the massive increases allowed on vacant apartments since 1997. 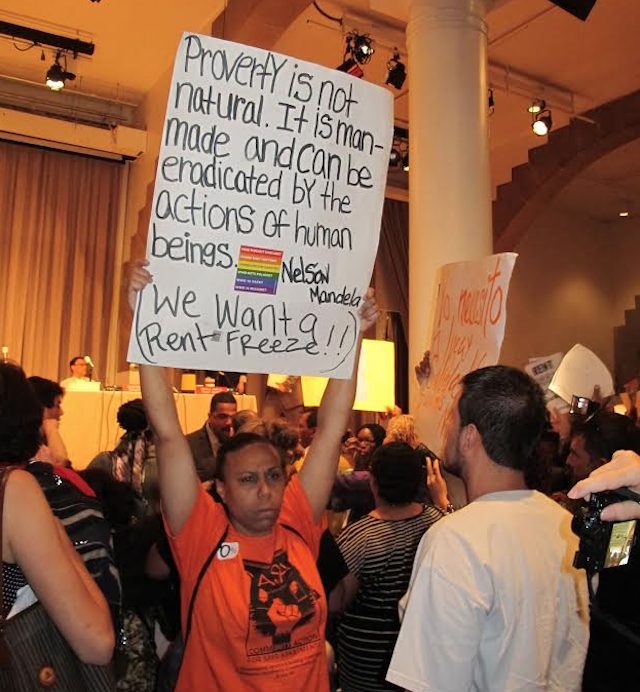 The nine-member RGB split into blocs not unlike the Supreme Court. A four-member right-wing faction consists of the two landlord representatives and the two Bloomberg-era holdovers among the five "public members," while the two tenant representatives and two of the three public members appointed by Mayor Bill de Blasio played the role of the liberals in favor of a freeze.

The third public member appointed by de Blasio, Steven Flax, played the Anthony Kennedy role and cast the deciding vote. (The mayor himself flip-flopped on the rent-freeze issue: He supported it as a candidate in 2013, then his administration indicated it would prefer a small increase, and finally, on the day of the vote, he said he was "encouraging all members" to vote for a freeze.)

The pro-landlord faction was obviously irate at the prospect of a rent freeze. Owner representative Magda Cruz called it “radical,” “confiscatory,” and “politically motivated,” while public member David Wenk, a silent and reliable vote for rent increases in his seven seasons on the board, called it “irresponsible.”

Meanwhile, the possibility of an increase inspired about 400 tenants to turn out, with large, loud contingents coming from community groups like CASA in the southwest Bronx and the Mirabal Sisters from West Harlem. They well outnumbered the about 50 landlords and real-estate lobbyists in the crowd.

In the end, however, the landlord faction decided to forestall a rent freeze by endorsing the 1% and 2.75% increases, originally Flax's proposal, instead of pushing for more. Flax called the move "disingenuous and duplicitous," and said he'd been under heavy pressure from both sides, "some of it dirty," but that he had to "vote my conscience."

The tenants in the crowd, sensing what was coming, chanted, "Steve, do the right thing." 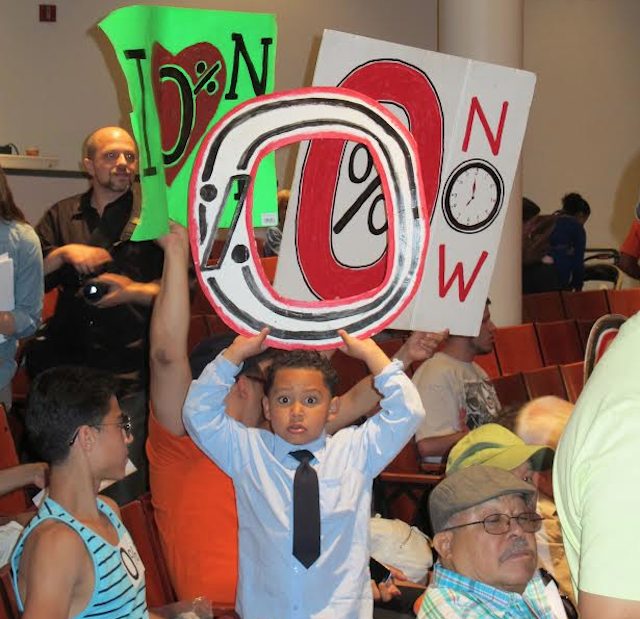 The move also undercut new RGB chair Rachel Godsil, who said the data supported a rent freeze. While the city's 1969 rent-stabilization law requires the board to ensure that landlords can pay the cost of running their buildings, she said, it is also intended "to prevent the exaction of unreasonable and unjust rents," and the board can also consider the "potential inequities" from previous years' decisions.

The board overestimated owners' costs, she said, and the result has been that landlords' average net operating income rose by 9.6% in 2012, while half of rent-stabilized tenants pay more than 34.9% of their income for rent, and more than one-third pay more than half of what they earn—the highest "rent burdens" since the law was enacted.

City Councilmember Jumaane Williams said he was disappointed too: "I don't know what Steve Flax was thinking."

"The public members who voted for this should resign," said CASA housing organizer Susanna Blankley.

"Everything's expensive. Nowhere is actually affordable now," said Rasel K. Rahman, an organizer for Chhaya, a South Asian community group in Jackson Heights. Apartments there that rented for $1,350 a month a year or two ago are now going for $1,750, he said.

And what was that "dirty" pressure Flax mentioned before his vote? Some tenant and community activists said they'd heard reports that landlords had threatened Flax, a vice president of M&T Bank, that they'd take their business elsewhere if he supported a rent freeze. "He needs those people to stay in business," one source said.

Steven Wishnia is a New York-based journalist and musician, and the editor of Tenant/Inquilino. He is also the author of "When the Drumming Stops," "Exit 25 Utopia," and "The Cannabis Companion." His previous work for Gothamist includes De Blasio's Affordable Housing Plan: Too Little, Too Late? and "How NYC Can Solve Its Affordable Housing Crisis"

#housing crisis
#income inequality
#landlords
#rent
#rent control
#rent guidelines board
#original
Do you know the scoop? Comment below or Send us a Tip