Sheriff's deputies arrested a Bronx landlord at JFK Airport late Monday night for allegedly ripping the doors, electrical sockets, and windows out of an apartment where a tenant was asking for more time to pay the rent, then taking a sledgehammer to the ceiling for good measure.

Michelle Richards says she had been living in a room in a two-family house in Morris Heights for four years last summer when she first started to have trouble with the landlord, Eon Mathieson. Mathieson has allegedly turned the building into a single-room-occupancy-like arrangement, with strangers living in each of the 10 bedrooms and paying him rent weekly. Richards said that she was paying $150 a week for the room she shared with her fiancé, but that last year when she told Mathieson that she would be late for June and July and wanted to set up a payment plan, he told her she would have to leave.

Mathieson didn't file for eviction, but Richards came home one day that July and found her door sitting off its hinges. She placed a strip of fabric over the door-frame as a stopgap, and went about her business. Later in the week, she came home from church and found the electrical sockets and light-switches in the room all pulled out of the walls, she said.

With the help of Legal Aid lawyers, Richards sued, demanding that Mathieson repair her apartment. She also called the police and made a harassment complaint. "I want you out of my damn house," the report quotes Mathieson as saying. Soon thereafter, he allegedly removed the windows.

She went to the house with a police officer two weeks later, and the officer told Mathieson to make the repairs by the following day, according to court filings. He didn't.

"The last nail he drove into the coffin was when he took a sledgehammer and sledgehammered the roof," Richards said. "He broke down my bed, put everything in trash bags, then trashed all my stuff...and changed the locks on" another door. 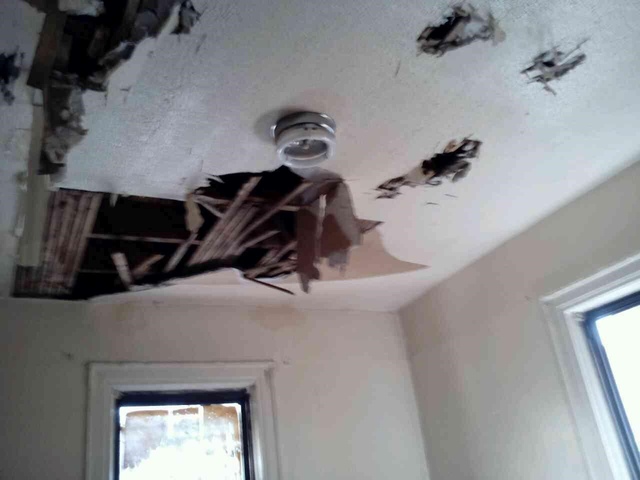 The landlord claims these holes in the ceiling were caused by a leak. (Michelle Richards/Gothamist)

The items Mathieson bagged up included Richards's furniture, television, clothing, and jewelry, which are now under a tarp in a locked metal cage outside the house. Richards said her engagement ring was lost in the ransacking.

As all of this was going on, Richards's lawyers were filing legal papers in Bronx housing and Supreme courts. Mathieson did not appear for any of the hearings, and as the summer turned to fall, judges issued a series of increasingly stern orders demanding that Mathieson fix the apartment and let Richards back in.

By January, when Mathieson had still done none of those things and made no case for himself, Housing Court Judge Laurie Marin issued a warrant for his arrest on contempt charges, but he was nowhere to be found. Richards said that he was likely taking his annual three-month trip to Guyana. In court today, Judge Marin ordered him to begin making the repairs and return to court on April 7th, according to Legal Aid lawyer Megan O'Byrne. He will also face sentencing for criminal and civil contempt, charges that could carry fines, imprisonment, or both. Criminal contempt charges against delinquent landlords are rare. 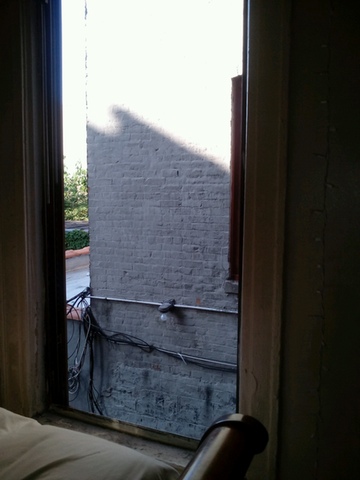 Room with a view: Mathieson removed the windows from Richards's room. (Michelle Richards/Gothamist)

Reached by phone, Mathieson had a wildly different account of what happened. He claimed to have been living in the house on Grand Avenue, and said that rather than being tenants, the other people living in his house were roommates. Richards, he said, was in need of a place to stay, and he let her sleep in his living room. She had been staying there no more than eight or nine months, he said, when she allegedly announced her intention to "not pay another f---ing dime."

(Richards provided scanned rent receipts dating back to August 2012. The receipts are initialed "E&V," the first initials of Mathieson and his wife Virginia. Eon Mathieson claimed he has divorced.)

Mathieson readily acknowledged removing the door and placing Richards's belongings outside, but claimed that she had installed the door on an open frame against his wishes. The many holes in the ceiling, he said, were the result of a leak from the roof. The windows, he explained, were in danger of falling outside onto someone and had to be removed.

"Never! Never!" he said when asked if he had sabotaged the room. "I wouldn’t destroy my own place."

Mathieson also claimed to be unaware of the pending lawsuits until his arrest this morning. Legal Aid records show that paralegals tried to serve Mathieson with an order five times altogether at both the Grand Avenue address and another Morris Heights address he has listed on court papers in a separate work injury case. Legal Aid sent the initial lawsuit by certified mail to both addresses, and a paralegal ultimately posted the order paperwork on the door at the second address. 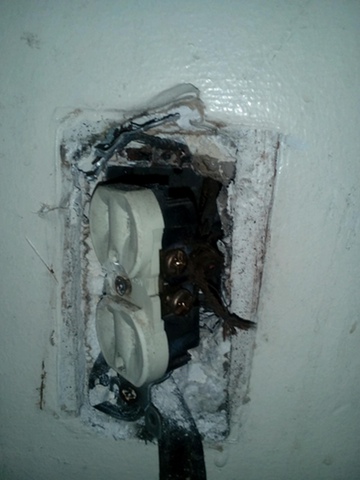 More of the aftermath of Mathieson's series of alleged rampages. (Michelle Richards/Gothamist)

"This is probably one of the most egregious cases I’ve ever seen," lawyer Megan O'Byrne said of Mathieson's behavior. "Most landlords in New York are pretty educated as to their obligations under the law...As far as the damage he did to the room and his complete unwillingness to show up to court, I think he thought if he ignored it it would go away. There’s a difference between being negligent and affirmatively creating poor living conditions, and this is obviously an affirmative thing that he did."

In addition to seeking repairs and getting Richards back in her room, Legal Aid is seeking damages, and to have the building declared rent-stabilized, since it has allegedly been carved up into more than six apartments and was built before 1974. The aggressive Supreme Court strategy is made possible by added funding from Mayor de Blasio for homelessness prevention, O'Byrne said.

Since being thrown out, Richards said she and her fiancé have been staying with an elderly couple they know.

"It’s mental hell. I can’t do the things I want to do, because I’m living in somebody’s house," she said. Richards claims Mathieson has yet to let her retrieve her stuff, so, "Everything I don’t have I have to spend money and buy. I had no clothes. The people that are living here, they had to help me to put clothes on my back."

Richards also said she has had to go on unpaid leave from her job as a social services case worker to attend all the court dates.

When she got the call today saying Mathieson had been arrested, "It was like, 'Thank you, Jesus, my prayer has been answered.' Because this guy has been running for the longest."