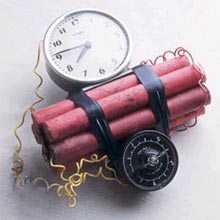 Brooklyn prosecutors have charged a landlord with trying to kill a tenant. Yung Tang is accused of attempted murder, assault and arson for the 2002 incident.

According to prosecutors, Tang wanted to evict tenant Israel Halberstam, who was $100,000 behind on rent on an electronics showroom space. Tang planted a homemade bomb under Halberstam's minivan; when the tenant moved his vehicle, the bomb exploded and he lost a leg. Initially, the incident worried people that it might be terrorist-related.

The Daily News reports that Tang was arrested last year, just within the five-year statute of limitations. And after he was released, "cops found him sleeping in his car in a Connecticut parking lot" with "a bag full of bomb-making material, silencers, a disguise and other items." Tang pleaded not guilty and his lawyer said, "We believe there is a lot more than meets the eye in this case. Stay tuned."