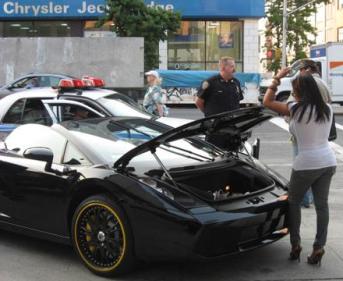 If you get a Lamborghini, we suppose it's only natural to want to immediately take it out for a spin - even if it doesn't have license plates. The police pulled over a black Lamborghini in Midtown yesterday after noticing it lacked plates. And its driver happened to be Lil' Kim.

According to 1010WINS, the performer said the car was a gift to her and had just been delivered. And when Lil' Kim pulled over at a gas station on 11th Avenue and 51st Street to discuss the matter with the police, it turned out she didn't have her license either!

The car was legally registered and Lil' Kim was not issued any summons. As for the car, her lawyer came by and drove her away in the car. Now that is why you keep lawyers on a retainer.

#As
#midtown
#News: NYC
#police
#The Police
Do you know the scoop? Comment below or Send us a Tip
A new Gothamist is coming! We’ve moved comments over to our beta site. Click here to join the conversation and get a preview of our new website.