LaGuardia Airport has frequently been difficult to get to since last summer, with traffic jams caused by an airport construction project prompting some travelers and even pilots to take desperate measures—like walking on the side of the highway in snow—to make their flights. Now, with spring break and religious holidays coming, the Port Authority is trying to prepare travelers for traffic delays as their attempt to ease the congestion hits some bumps.

"With more than 800,000 passengers expected at LaGuardia during the April 5 to April 17 spring break and holiday period, travelers are urged to leave plenty of time to reach the airport and consider using mass transit," the agency announced yesterday. After you read between the lines—"DON'T DRIVE TO THE AIRPORT UNLESS YOU REALLY MUST AND DON'T BLAME US IF YOU'RE SITTING IN TRAFFIC"—the Port Authority had these important things to note:

- $18/day parking at the Long Term Parking lot—and there's a free airport shuttle on the Blue and Red routes from the lot to Terminals A, B, C and D. The Port Authority warned, "Drivers should take the Grand Central Parkway (GCP) at Exit 5 and follow signs to enter the lot via the airport entrance on 82nd Street. Avoid the GCP’s westbound Exit 7 and the 94th Street area if traveling in from the east. Daily and hourly lots adjacent to the terminals are expected to fill quickly, have limited availability, and cost $59 a day."

- Terminal B's taxi stand is now at the west end of the terminal.

- Arriving travelers taking "for-hire" cars—like Uber, Lyft, Gett, Via, Juno and even privat car services—can no longer be picked up at the terminal. The Port Authority said, "Effective April 5, the pickup location for all passengers flying into Terminal B using For-Hire Vehicles (FHVs)... will now be centralized within the “Car Services, App-Based Rides & Black Car Pick-Up Area” located on Runway Drive west of Terminal B."

Let's talk about the new FHV pick-up situation for a moment.

I had vaguely recalled something being announced on Monday about a new pick-up area but I didn't realize what this actually meant until I opened up my ride-hailing app after my plane landed on Wednesday. The app informed me that the driver would meet me at a parking lot after I took a shuttle bus there. At the exits by the baggage claim, there were signs instructing me to look for more signs outside for the Green route shuttle bus, and to go to Passenger Pickup 11B. But when I got outside, there was no visible signage indicating what pickup area I was currently in. The FHV pickup lot sign also said to look for arrows and more signs directing me to Passenger Pickup 11B, but I couldn't see any signs, because there were at least 100 people—maybe 200 people—waiting for taxis.

The bus was standing room-only, packed with weary fliers and a lot of their luggage. After the shuttle suddenly braked, the man standing next to me apologized to a seated woman for almost falling into her. She pointed to two bags on her lap, "It's okay—I've got a buffer!" Everyone laughed, but we were pretty miserable as the shuttle crawled its way to the lot.

What's causing all this is Governor Cuomo's plan to turn LaGuardia from a zero to a hero, with world-class facilities. The construction, if you haven't been to the airport lately, is extensive, and many of the roads are closed for the big renovation.

Once at the pickup lot, I saw plenty of airport workers trying to direct travelers out of the roadway and guide the for-hire cars to spots where they could wait for their fares. Dozens of people were waiting for their vehicles on the edges of the lot. My driver said it took 20 minutes just for him to get there.

I was one of the lucky ones. One Colorado resident told WABC 7, "I have been on the line with my dispatcher three times for the limo company, and he has said my driver is two minutes away. That was about 35-40 minutes ago."

Others said their Uber drivers totally stiffed them: "They don't know how to pick us up. We've been waiting 30 to 40 minutes."

My driver confirmed this was pretty bad, but that "it was worse during March Madness." Well, happy Easter and Pesach everyone. 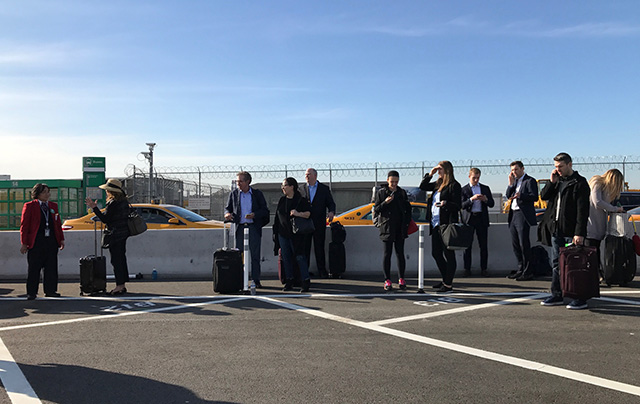 #congestion
#for hire vehicle pickup
#laguardia airport
#port authority
Do you know the scoop? Comment below or Send us a Tip