Earlier this morning around 5:30 a.m., the main terminal at LaGuardia Airport was evacuated because of a bomb threat. Apparently a man claimed he had a bomb—he was taken into custody and his bag search—but the device was deemed harmless. However the terminal's C concourse will remained closed for hours, because it's a crime scene. Updated below: A 32-year-old New Yorker was arrested. 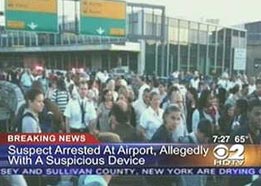 The NY Post reports, "Hundreds of confused passengers were forced off planes and rushed out of the airport just after 5:30 a.m. when the erratic man approached security in the C Concourse and said he had explosives in his bag." The Port Authority's spokesman John Kelly said that the man "was just acting crazy," while some say he was intoxicated. All that was found in his bag were "few batteries and wires."

One man who was waiting to fly to Milwaukee with his family told the Daily News, “All we know is that they told us to get out of the airport. Someone told me to exit the terminal and run. Then I saw all the fire and police trucks coming, and we’ve been told all our flights will be delayed.” The air traffic control tower was also evacuated. The C concourse serves United, United Express and American Eagle airlines.

Update, 3:10 p.m.: The suspect has been identified as 32-year-old New York resident Scott McGann, who was flying United to Oakland, with connections in Chicago and Denver. Apparently a ticket agent notified TSA agents because he seemed intoxicated was acting "spaced out." From the Daily News:

Authorities at the security check noticed McGann was acting strange and saw wires and a fuse sticking out of his bag. A Port Authority cop grabbed the bag from McGann and tackled him.

Officials cleared the central terminal and an NYPD bomb squad entered to test the bag - which turned out to be a bunch of batteries taped together to look like dynamite with wires sticking out. McGann was arrested and will be arraigned later Saturday in Queens Supreme Court.

NYPD spokesman Paul Browne said it was a "hoax device" and "Clearly, it appeared he wanted people to think" he had a bomb. While most of the terminal has reopened, there are still delays at LaGuardia.