Thousands of people planning on traveling out of Laguardia Airport yesterday morning had their plans changed when a man was found with a fake bomb in his bag, prompting the evacuation of the central terminal. The NY Times reports, "passengers who had arrived for early-morning flights were forced to evacuate for nearly three hours, creating a domino effect of car and foot traffic that caused chaos during one of the busier travel days of the summer." And a 32-year-old man was arrested for allegedly causing the mess. 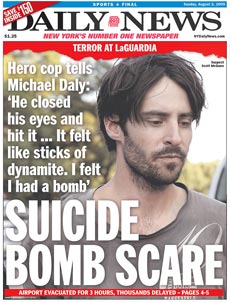 Around 5 a.m., a United ticketing agent had apparently expressed concerns about Scott McGann— she said, "He looked pretty much fried. He didn't have any ID. When you don't have any ID, there are procedures you have to follow"—and alerted the TSA agents. According to the Daily News, McGann was tackled by Port Authority cops "just as he pressed a red button on what looked like a detonator... The device turned out to be batteries, cylinders and wire wrapped with tape, but Port Authority police didn't know that when they hurled the bag behind a column and tackled" McGann. The terminal was evacuated and the NYPD bomb squad used a water cannon on McGann's bag.

Travelers were frustrated with the havoc created. Flights were delayed or cancelled, as some flight crews were unable to get to their terminals because no traffic was allowed at the airport for hours. One told WABC 7, "It was pretty chaotic...guys in blue shirts just came flying out of no where..and everybody moved to the 'A' gate," and when travelers were allowed back into the terminal 4.5 hours after the evacuation, another said, "People are fighting and people are cutting into lines. It's textbook pandemonium."

McGann, reportedly homeless and living on the streets of Manhattan for the past year, was charged with first-degree placing a false bomb, placing a false bomb or hazardous substance in a mass transportation facility and making a terrorist threat. He was unresponsive during the hearing and was ordered to have a psychiatric exam. McGann is originally from California and arrived in NYC in 2006. The Post reports that his mother in California had bought him a ticket to return for a family reunion (another source says she may have wanted to put him in a mental institution).

Further: "Just two months ago, McGann was arrested following a bizarre incident in which he wandered into the criminal courthouse at 346 Broadway in Manhattan, snatched a stack of papers from a lawyer's hands and tried to run from the building. McGann also has a 1992 arrest for carrying a gun to a high school. He has been arrested several times since arriving in New York, for quality-of-life crimes like unauthorized vending, sources said." He's worked as a computer/technology consultant, but has had some troubles; a colleague told the News, "He's got a few psychological problems. I'm not sure what exactly, but he told me he had been in treatment about a year ago. Usually he was a nice guy, but he could get very angry."

#bomb scare
#bomb threat
#laguardia airport
#Scott McGann
Do you know the scoop? Comment below or Send us a Tip