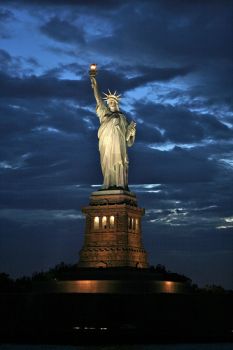 Flash forward to the current Independence Day and news of Lady Liberty's crown re-opening may become a reality. The Daily News reports the federal government is exploring the idea, which Weiner says is "a dramatic breakthrough."

The National Park Service, which has limited Liberty Island visitors to her pedestal, on June 24 posted a request for bids from engineering and architectural firms to study what it takes to open the entire statue to the public.

"We are asking the firm to answer two questions. Is there a way to make changes to the structure itself to make it comply with safety codes? If they say, no...they would look at a way to minimize the risk," said Darren Boch, a spokesman for the National Park Service.

While there is no guarantee of the crown re-opening and the first new trip up won't occur anytime in the near future, the proper steps are now being taken in order to make it happen. If you've never seen the view from the top, here's a glimpse.