Since the MTA confirmed its decision to suspend L train service between Brooklyn and Manhattan for 18 months starting in January 2019, there's been no shortage of suggestions for transit alternatives—from the whimsical (floating, inflatable East River tunnel), to the utopian (how about a car-free 14th Street?), to the pragmatic (let's expand service on the train routes that intersect with the L). This week, a report from NYU's Rudin School of Transportation [PDF] proposes expanded bus, train and ferry service—with some government-subsidized help from private companies like Uber and Lyft.

"The top priority should be improving subway service and ramping up bus service for these areas, but it would also be useful to shuttle people over the bridge in a ride-share to other subway lines," said Rudin Center Assistant Director Sarah Kaufman on Thursday.

While the study doesn't delve into exact cost and implementation, Kaufman added that New York City wouldn't be the first to partner with Uber—there's a small suburb of Orlando, Florida, called Alamonte Springs, that started subsidizing Uber rides in March, in a stated effort to encourage people to take public transit (logic: if you can Uber to the train station, you're more likely to take the train). Rides to the SunRail are subsidized 25%, and rides within city limits are subsidies 20%.

"It would have to be done carefully, right?" Kaufman said. "In a way, it would benefit the residents along the L to use Uber, Lyft and Via, because they would have, essentially, door-to-door service. At the same time the congestion would be unbearable. So the idea is to carefully incentivize these businesses to offer more services in the areas along the L, but especially focusing on the after-hours service, which is especially what Williamsburg and Bushwick need."

As for the rest of the 225,000 daily L train users who don't live in North Brooklyn—in neighborhoods such as Canarsie, Brownsville and Cyprus Hills—NYU suggests that expanded service on intersecting train lines should be the priority. "The idea is that people further out on the L have more options to chose from," Kaufman said. "They aren't ideal and they will be not very convenient, but farther out on the L you have the M, the J/Z and A/C and the 3."

"We are happy to explore ways to work with the State, City and the MTA to be part of a larger solution that ensures that Brooklyn residents have an affordable, reliable way to commute to Manhattan during the L train shutdown," said Uber spokeswoman Alix Anfang. 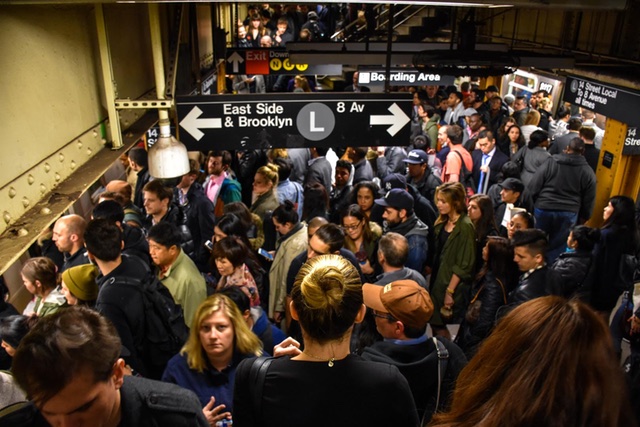 NYU has also suggests implementing a scooter share—something similar to Scoot Networks in San Francisco, which charges $3 for the first 30 minutes of a trip (or $5 during rush hour), plus 10 cents for every additional minute.

"I think that it's great to put all of the options on the table, but it's really important that we don't get distracted from thinking about the public policy solutions," said Masha Burina, a Community Organizer with the Riders Alliance. "Because we could use this as an opportunity to really improve the L train, but also our bus routes."

To date, the MTA has confirmed that it will expand service on the J, G and M trains during the L shutdown, with additional subway cars and more frequent rush hour trains (keep in mind that expanded M service will require extensive M line closures for repairs starting next summer). Other ideas that have been floated—expanded ferry service, B39 bus service over the Williamsburg bridge, a bus-heavy or even car-free 14th Street—will require coordination with state and city agencies, like the Department of Transportation.

The MTA says it will have a full alternative transportation proposal at least one year before the shutdown is scheduled to begin.

"The MTA is committed to open partnership and community engagement as we develop alternative service plans to minimize impacts on L train riders and surrounding businesses during the closure," said the MTA spokeswoman in a statement Thursday. "We still have 2.5 years before the closure and many solutions will involve our partners at City, State and Federal agencies."

"DOT and other City agencies stand ready to work collaboratively with the MTA to support the implementation of potential mitigation efforts," stated a DOT spokesperson. "We will also review the suggestions included in the NYU Rudin Center for Transportation’s recent report."

#l train shutdown
#lyft
#MTA
#North Williamsburg
#uber
Do you know the scoop? Comment below or Send us a Tip