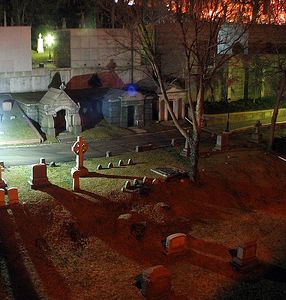 Working his political connections to score one of the few below-ground burial plots left in Manhattan, former Mayor Ed Koch has announced that he will be buried in Trinity Church Cemetery at Broadway and 155th Street. The 83-year-old New Yorker says, “The idea of leaving Manhattan permanently irritates me.” So when the time comes he’ll be laid to rest in the company of such notables as Jerry Orbach, naturalist John James Audubon, and a slew of Astors.

After acquiring the highly-coveted plot for $20,000 – thanks to a former staffer who now runs Trinity Church’s real estate division – Koch checked in with a number of rabbis to make sure his interment in a non-Jewish cemetery was “do-able.” To accommodate Jewish tradition, he's having the nearest gate inscribed as “the gate for the Jews,” and installing rails around his plot.

Koch’s tombstone will feature the Jewish prayer “Hear O Israel, the Lord our God, the Lord is One,” as well as the last words of journalist Daniel Pearl before he was slain by terrorists: “My father is Jewish; my mother is Jewish; I am Jewish.” Apparently there wasn’t any room left for "How am I doing?"

Photo of Trinity Church Cemetery and Mausoleum by Kimyo