The knife-wielding man who was fatally shot by police in front of a 7th Avenue office building on Saturday was known as the "Times Square Ninja," according to two area street vendors. One vendor who sells self-produced CDs tells the Times that Darrius H. Kennedy, 31, was known for dressing up like a ninja, wearing black clothes and a black mask, and doing backflips for tourists' tips. Here's a photo from June of this year showing a tourist posing with a ninja in Times Square—it's unclear if this was Kennedy, but a sign beside him advertises backflips for $5. 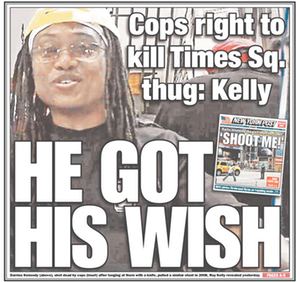 Police say they approached Kennedy because they believed he was smoking marijuana. He allegedly became belligerent, and, in a confrontation widely captured by cell phone cameras, he led a growing number of officers through Times Square brandishing an 11-inch kitchen knife. After refusing to put down the knife, police say he advanced on two officers, who opened fire when he was three feet away. 12 shots were fired—one officer fired nine times, the other three.

Kennedy was pronounced dead at Bellevue Hospital, where he was taken in 2008 after police say he created a disturbance in Times Square by kicking over garbage cans. A month later, in November 2008, he allegedly threatened officers with a screwdriver after the tried to stop him from harassing drivers near Lincoln Center. The Times reports that he was sentenced to 40 days in jail for resisting arrest. The Post reports that he had 11 priors, including busts for pot possession and robbery.

Kennedy's last known address was Hempstead, Long Island. Newsday spoke with his cousin, Kathy Johnson, of Hempstead, who said she last saw her cousin at her mother's birthday party in June, and he seemed fine. "It was too many bullets, the killing," Johnson tells Newsday. "They could have given him a warning shot, probably a shot in the leg or the arm." But Charles H. Ramsey, commissioner of the Philadelphia Police Department, tells the Times that officers are trained to aim for “center mass,” not the limbs of a suspect, when using deadly force.

Police tried using pepper spray six times on Kennedy, according to NYPD spokesman Paul Browne, who told reporters, "No officer on the scene had a Taser. The overarching guideline in the use of deadly force is whether the officer or another person present was in imminent danger of death or serious injury. Neither police officers nor the public were in the line of fire."

NYPD Commissioner Ray Kelly insists officers "responded appropriately. You can second guess all of these things. Under the circumstances what the officers did was appropriate to the situation." And Mayor Bloomberg told reporters that the officers "probably acted in responsible ways” in shooting “somebody who must have been mentally deranged. Taking a knife and going after other people, particularly police officers, isn’t something that a sane person would do."