Not long after a man stabbed two men to death on the No. 2 train with a kitchen knife last year, the NYPD stepped up its enforcement of the city's illegal knife ban, and Manhattan DA Cyrus Vance got Paragon and Home Depot to stop selling illegal switchblades. Former Pulino's chef Nate Appleman was caught up in the crackdown, as was artist John Copeland, who was arrested in October for allegedly carrying a gravity knife in a belt clip as he walked home in the East Village. Now Copeland has filed a lawsuit to block these kinds of arrests, and he's teamed up with the Arizona-based group Knife Rights. Their slogan: Sharper Future™. 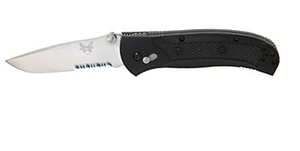 While the rest of us are passively following the herd to a knife-free slaughter, a small but dedicated group of knife lovers are on the front lines fighting for your right to own one-hand opening pocket knives. New York State law prohibits knives that open via centrifugal force and have a blade that locks automatically in place. The Knife Rights lawsuit defends these blades as "legal tools, used and carried every day by millions of law-abiding citizens for work, recreation and self-defense." Who doesn't enjoy a nice recreational afternoon in the park with a razor sharp gravity knife?

Copeland's lawsuit argues that he showed same knife to other cops "on two separate occasions" and he says they told him it was legal after they they tried and failed to open it "using a 'flicking motion," the Post reports. Copeland got off with a conditional discharge after his arrest. Reached for comment about his lawsuit, city lawyer Gabriel Taussig said the suit "has no merit. We are confident that the court will find no constitutional violations." Tell that to Ted Nugent, pal—the gun toting musician has also thrown his weight behind Knife Rights. On the group's website he's prominently quoted declaring, "God Bless knife rights!"